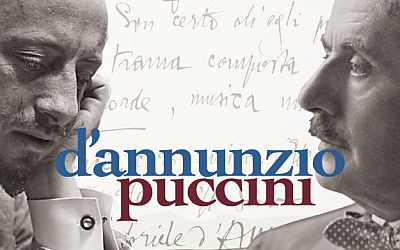 A meeting dedicated to the theme of the failed artistic collaboration between Gabriele D'Annunzio and Giacomo Puccini. A long 13-sided letter written by the poet to Giulio Ricordi, dated 7 August 1906 and written on La Versiliana / Pietrasanta / in Lucchesia headed paper. A series of documents and of the correspondence between the two and Puccini himself from the mid-90s of the nineteenth century until 1913.
A negative epilogue, a libretto for a Puccini opera that was never realized, perhaps because the poetic root of D'Annunzio did not fit the needs of melodrama, as reinterpreted by Puccini. However, the meeting of these two artistic personalities who have profoundly marked the cultural history of the country, can be considered an important event.

The letter is exhibited at the Puccini Museum, accompanied by antique images of Villa La Versiliana and two photos from the Archive of the Il Vittoriale Foundation and from the Ricordi Historical Archive.