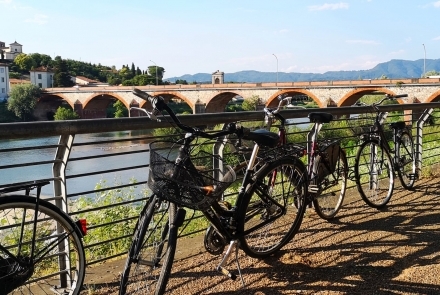 In the immediate outskirts in the southern part of the city there is a path running along the nineteenth-century aqueduct, up to the area of ​​the springs. From the railway station you can easily reach the tempietto di valle monument, a small neoclassical building ending at the series of arches. Here you can stock up on water, or later in one of the many springs you will encounter along your way.
The path runs along the monumental arches of the aqueduct for approx. three kilometers, crossing the countryside, the Ozzeri stream and the Verciano wood until it reaches the tempietto di Monte monument.

From here, following the traces of the aqueduct on the ground, you will arrive at the path that, crossing the wood, leads to the area of ​​the springs called "Parole d'oro".

For the return, once you are out of the woods, you can choose an alternative road that follows via di Sottomonte for a stretch, passing under the arches, then turning towards Massa Macinaia (right) in via Spada, on the edge of an alder wood and crossing the agricultural land dominated by the piezometric tower along the Rogio canal, until you reach the village of Pieve San Paolo to return back to Lucca on via di Tiglio.

The route is one way about 4 km long, the suggested tour is about 15 km long on dirt and asphalted road.

On the river banks

11 kilometers of dirt road between poplars and willows and patches of natural wood. The circular route winds along the mighty banks, designed by the architect Nottolini to contain the bizarre course of the Serchio river. From the Petroni terrace, a stone's throw from the historic center of Lucca, you can access the path that comes up beside the course of the river and opens onto the surrounding hills and the agricultural landscape.

It's possible to take the 8 shaped route along the cycle and pedestrian walkway that you meet halfway and from where you have a fascinating view on the river and the little beaches lapped by the willow branches and where ducks and other seasonal birds make a stop.

Near the San Quirico bridge, on Saturday morning, the farmers' market is held in the area of the Foro Boario.
In the summer, near the San Pietro bridge, you can stop at the Albogatti urban farm.

The ring route is an about 11 km long dirt road.

The Francigena cycle and pedestrian route

On the pilgrims route, in just one day you can travel the stretch of the Via Francigena between two very important stages: Lucca, home of the Volto Santo, and Altopascio, home of the religious order of the Cavaleri del Tau monks. From Lucca, leaving Porta Elisa, follow the signs that cross the Lucca countryside, along parish churches and villages. In Capannori you can make a short stop to visit the Athena Museum and the labyrinth path, in Porcari - if you are athletic enough - you can go up to the "Torretta" hill from which you enjoy the panorama over the Piana di Lucca area. Just before reaching Altopascio in Badia Pozzeveri, you can make a stop to admire the remains of the ancient abbey to reach Altopascio and the Hospital of the Tau monks that managed in this place one of the most famous hospitals for medieval pilgrims and others throughout Europe.

The one way route is about 20 km long on dirt and asphalt roads. At the return you can just go back or take the train to Altopascio station, checking the possibility of loading your bicycle.

Heading north towards the Villas of Lucca

From the Petroni terrace, before arriving at the San Quirico bridge, turn right onto the dirt road that forms the northern section of the Puccini cycle track, and you will leave the city towards the Brancoleria hills and the Pizzorne plateau in direction of the aristocratic landscape of the monumental villas of the Piana di Lucca. In Ponte a Moriano the cycle / pedestrian route ends and from here, passing next to the theater, it is easy to reach Via delle Ville at the foot of the hills. Passing  Villa Cenami and Villa Querci, you will reach the 3 villas Oliva, Grabau and Reale in Marlia, whose large parks with green theaters, statues, fountains and monumental trees are the pride of the area and can be visited in the summer.
From Villa Reale in Marlia, which once was the residence of Princess Elisa Baciocchi, following the access road, via della Fraga, you can return directly on the path along the river to return back to Lucca.

The route is about 20 km long on dirt and asphalted road.

Go south between fortresses and castles

Continuing along the southern section of the Puccini cycle-pedestrian track, the suggestive route winds its way into a narrow section of Mount Pisano, on the slopes of the hills that separate the Piana di Lucca area from Pisa jumping back in the centuries to medieval castles. You cross ancient villages with small churches and cultivated fields, testimony of the oldest settlements outside the city until you reach the ancient border of continuous military disputes between Lucca and Pisa in the Middle Ages, the Ripafratta area, where the Pisan fortress of San Paolino and the Lucca castle of Nozzano face each other.

At Ripafratta you can cross the river and return to Lucca along the road at the foot of Mount Penna, up to Nozzano, with the medieval castle and tower and where the houses, arranged in a ring, form the ancient village. On the way back to Lucca, it is worth a little detour to the Pieve di Arliano, one of the oldest churches of the area. Finally, returning to the path of the river park, you reach Lucca.

The route is about 20 km long on a dirt and asphalted road.