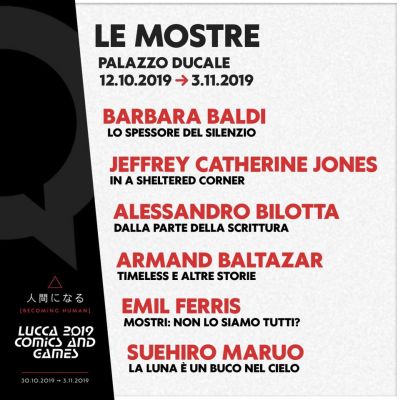 Countdown to the 2019 edition of Lucca Comics & Games.

While in the squares and on the walls proceeds the preparation of the pavilions, in the Palaces of Lucca are inaugurated the exhibitions that accompany the event every year with personal exhibitions of the great authors of comics, fantasy illustration, for children and game art.

The frescoes by the painter Ademollo, "graphic novel" for a few days, tell in three "tables" the Triumph of Trajan, an example of enlightened and magnanimous Sovereign, triumphant over Dacia. On the external wall, Marie Louise of Bourbon, in the role of the Allegory of the Bourbon Constance, triumphs over a chariot pulled by white horses and tramples on Napoleon's vices: Violence, Envy, Betrayal, and decrees the success of the Restoration.

Other different stories and emotions in the tables of the six authors chosen for the personal 2019.

In the days of Lucca Comics and Games, the frescoed rooms of the palace of Elisa, sister of Napoleon and Princess of Lucca, become the background for the exhibitions of six contemporary authors. The journey in space-time that will be the figure of the five days of the event, begins.

First of all, Barbara Baldi, author of the festival playbill, on display with a collection entitled "The Thickness of Silence", an evocative collection, a very interesting author with a work to study and observe with care. Baldi is the winner in 2018 of the Gran Guinigi as best illustrator, and this year brings to Lucca an exhibition that showcases for the first time sketches and unpublished material from her books and a selection of previews from her new comic book in progress, as well as unpublished plates created exclusively for the exhibition catalogue and this year's poster.

At the Palazzo Ducale the plates of his first works will be exhibited. Already an established colourist and illustrator, with just 2 graphic novels she has established herself as a reference on the international scene. The exhibition will allow the viewer not only to approach the author's work in the field of comic strip fiction, but also to discover her evocative technique, combined with a masterful use of color and a strong taste for the composition of the image.

Jeffrey Catherine Jones with In a Sheltered Corner. Fascinating works with a very evident personal technique. Among the works on display are The Wall, 1977, a painting made for a limited edition print and present on the book that collects the best works of the years of The Studio, a panel from his most famous series Idyl and the painting for the cover of the book Nine Princes In Amber. The author is the protagonist, together with Bernie Wrightson, Michael W. Kaluta and Barry Windsor-Smith, of the Fab Four of the American scene, this fascinating comic book character will be honored with a rich retrospective.  In Lucca in 1976 he received the award as Best Artist of the Year for the comic book series Idyl. Jones has created hundreds of covers for many different types of books, especially fantasy, horror and science fiction.

Not only illustrator and painter, she has created many horror comic stories, but she is especially remembered for "Idyl" and "I'm Age". Between 1975 and 1979, together with Bernie Wrightson, Michael W. Kaluta and Barry Windosor-Smith, she rented a loft in New York where what the world has known as The Studio was born, the place where some of the most important and iconic comic stories, illustrations and paintings of their respective genres were created. Frank Frazetta called Jones "the greatest living painter". In Lucca in 1976 he received the award as Best Artist of the Year for the comic book series "Idyl".

Alessandro Bilotta is present with the collection "Dalla parte della scrittura". An exhibition that enhances the word and the relationship with the vision of the designer, with the Italian screenwriter's writing and his relationship with the finished table. In the exhibition there is a selection of plates dedicated to his characters: Mercurio Loi, Valter Buio, Giulio Maraviglia, Povero Pinocchio (reissued by Star Comics for LC&G 2019), La Dottrina and many others, often in action in the background, through different periods, of a very eternal Rome.

Alessandro Bilotta is the award-winning author of numerous cult series: from "La Dottrina" to "Valter Buio", from the saga of "The Planet of the Dead" in the series "Dylan Dog" to the series "Mercurio Loi"; awarded the Gran Guinigi 2018 for the best comic book series. For the French market, "Poor Pinocchio", "Giulio Maraviglia" and many others. On display the creative process of a comic strip starting from the idea of the screenwriter, following all the steps to get to the final result. An exhibition to read, see and listen to

Armand Baltazar with "Timeless and other stories" takes us into the world of dreams and childhood, from the world of animated cinema to his first illustrated novel. Among the originals on display are studies made for The Prince of Egypt, Spirit, Simbad and The Princess and the Frog, as well as digital works for Cars 2, Inside Out, Arlo's Journey, and original illustrations and studies made for his first novel Timeless, Diego and the Rangers of the Vastoatlantico. An exciting corner in which to return adoring children.

Emil Ferris presents an absolute preview for Italy: "Monsters: aren't we all?". Ferris's art is declined with illustrations and original plates from the disruptive debut graphic novel La mia cosa preferito sono i mostri (Gran Guinigi 2018 as Best Graphic Novel) an editorial case praised by the public and critics that has sold over 70,000 copies in the United States alone. One of the most important voices of American comics in recent years. A real journey, among memories, affections and contradictions of the Chicago of the late 60s. A disconcerting volume both in terms of graphics and narrative, 400 pages to savor calmly to immerse yourself in the fantastic world of Emil.

Lucca Comics & Games hosts the first solo show in Italy by the master of Japanese comics ranging from horror, erotic and grotesque: Suehiro Maruo with "The moon is a hole in the sky". 40 originals in black and white and in color from the works published over the last 15 years by Coconino Press, closely show the techniques and secrets behind the birth of his magnetic and dark world, populated by unscrupulous demonic creatures, apparently unsuspected monsters and outcasts with a gentle soul, complex and never banal characters, faithful mirror of contemporary reality. Maruo will also be the protagonist of an exhibition and a series of events dedicated to celebrate a career studded with international successes and the Italian publication of the final volume of the series "Tomino la dannata", his most recent work.

At the Chiesa dei Servi, a preview of the largest exhibition ever held in the world dedicated to the artistic genius of John Buscema. The exceptional experience of reading directly from the original plates 2 complete stories, "Conan Il Barbaro" n. 29 ("Two Against Turan!") of 1973 and one of "The Mighty Thor" n. 197 ("The Well at the Edge of the World!") of 1972, an unrepeatable emotion for every Ninth Art enthusiast. There are also some plates taken from Tarzan and Silver Surfer. The exhibition will then continue in Rome at the CArt Gallery.

Lucca Comics & Games opens its doors to the most "human" among superheroes: donors of organs, cells and tissues. The 2019 edition of the festival, which will wonder what "being human" does to us, will host "Becoming Human: Be a Hero. Donors: extraordinarily human, simply heroes", an exhibition dedicated to national and international social communication campaigns for the promotion of donation that have comic book characters and superheroes as their subjects and testimonials, from 30 October to 3 November in Lucca at the Palazzo dell'Illustrazione of the Banca del Monte Foundation, is part of the national campaign on organ and tissue donation and transplantation "Diamo il meglio di noi", promoted by the Ministry of Health and the National Transplant Centre in collaboration with sector associations.