A day on the plateau 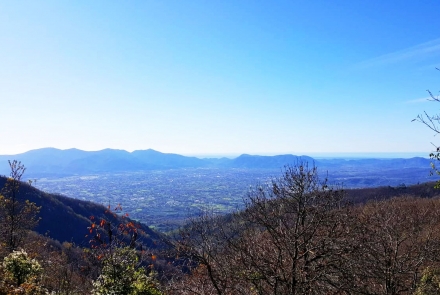 The day is Ferragosto (midsummer day) and the plateau is the Altopiano delle Pizzorne. A great summer classic trip in the Piana di Lucca, a popular destination for tourists and locals on hot Sundays in July and August and, for the most affectionate, an unmissable appointment on the high day of summer.

The locals call it "Pizzorna", but its correct name is "Le Pizzorne". It is a plateau in the Tuscan-Emilian Apennines that reaches a thousand metres in height. Its gentle profile is a crown that encircles the territory north of the Piana di Lucca, a large green terrace overlooking plains and valleys, with the unmistakable Monte Pisano in front and superb views of the Serchio Valley, the Apuan Alps and the Apennines.

A route that goes back along an ancient path of history, art, spirituality and nature.
The Pizzorne Plateau is easily reached by car from Matraia (Capannori) or from Villa Basilica. The sporty ones of you and well-trained can tackle the tortuous climb by bike or mountain bike. Today's pilgrims can reach the Pizzorne on foot, following the historic route that recalls the ancient Cammino di Santa Giulia, a demanding but pleasant stretch that offers little surprises of art and architecture along the way, whenever you come across Romanesque churches and parish churches that bear witness to the long history of these places. Relaxing picnics and outings in the countryside

A large green meadow surrounded by woods welcomes walkers and holidaymakers alike and, in the shade of the trees, you can look for the best spot for a relaxing break in nature.
If you're looking for an August bank holiday like a local, you'll find tables set up, barbecues, hammocks suspended between logs, colourful plaids on the grass and even tents where the young and adventurous spend the nights.
The air is cool even on the hottest days and it is always a good idea to bring a light jacket or jumper.

On summer Sundays you can buy cheese, honey, fruit and vegetables and other local products at the farmers' and street markets.
The area is rich in excellent spring water and at the large stone fountain near the church of the SS. Crocifisso there are always people waiting for their turn to fill bottles and flasks.
If picnics are not your thing, there is the legendary restaurant where you can taste fantastic Tuscan crostini and the typical "tordelli", or the tasty  salviato di Villa Basilica. Walks, hikes, views and a touch of adrenaline

The Pizzorne Plateau is the starting point for a number of marked trails leading to the nearby villages of Boveglio, Corsagna, Valgiano, San Pietro a Marcigliano, Sant' Andrea in Caprile, Tofori, Petrognano, small villages with narrow alleyways and stone houses, surrounded by age-old chestnut groves and coniferous forests, churches and parish churches, as well as villas and farms that produce excellent DOC wine and extra-virgin olive oil.

The most demanding hikes reach the peaks of Scarpiglione, Pietra Pertusa and Gromigno, along paths, mule tracks and cart tracks immersed in woods crossed by fairytale-like streams.
Wonder but also mystery at Pietra Pertusa where you can still see the remains of an ancient dolmen built by the people who inhabited these lands between the fifth and third millennium BC. From the top of the Pietra Pertusa hill, the view overlooks the gentle hills of the Apennines and the rugged Apuan Alps to the north. To the south, beyond Monte Pisano, the coast and the bright horizon of the Tyrrhenian Sea.

If you are in the company of "young adventurers", extend the road a little and reach the Parco Avventura "Sospeso nel Verde".
Walkways, ropes, Tibetan bridges and pulleys await you. Heights of up to 40 metres and breathtaking jumps through trees of more than 200 metres, 14 acrobatic courses of varying difficulty but all in complete safety.

Villa Basilica: the village, the parish church, the fortress.

At the end of the day, before the evening shadows fall, those who still want to explore lesser-known places or look at things already seen with new eyes can arrive at Villa Basilica.

Santa Maria Assunta is the patron saint and the church is obviously dedicated to her. The day of Ferragosto is the best opportunity to take a stroll through the alleys and squares. The two most precious jewels in the church are the 13th-century crucifix above the high altar and the impressive 6th-century pre-Romanesque crypt.
Looking up to the sky, above the village, another pleasant surprise. The remains of the ancient and mighty Rocca, to be admired from below or reached on foot. Even from here, the panorama of the green valley and the village from above does not disappoint.