FROM HAMLET TO HAMLET 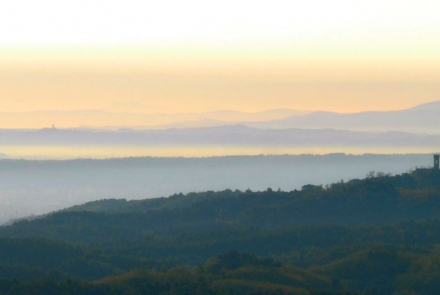 A diffuse landscape of art and culture. In the historic centre of Lucca, churches and palaces, streets and squares, the mighty City Walls themselves tell about a noble and glorious past.

The hills of Lucca and Monte Pisano, gathering the plain of Lucca, are dotted with small villages and towns where this tale goes on and on, finding itself in the architecture and in every smallest detail of the landscape. From the winding streets of the villages, from the small squares facing each other like terraces, one enjoys sweeping views of the entire plain and hills. A short trip through agricultural and natural landscapes gives you the tranquillity and atmosphere of the most secret Tuscan countryside. Here are some that are worth visiting for a stay dedicated to relaxation, art and culture.

In the footsteps of the Via Francigena pilgrims

The footsteps of the Francigena pilgrims, who still cross it in large numbers today, echo in the courtyards around the church of San Jacopo and the imposing bell tower called the 'Smarrita'. Altopascio stands around the medieval building of the Hospedale of the Order of Hospitaller monks who founded the Order in the 11th century. The ancient walls still encircle for a long stretch and the entrance is still through the two original doors. In addition to the Tau symbol found almost everywhere, the tradition of bread remains from that time, which can be found fragrant in the village bakeries.

A story of bread and wine

Wine, on the other hand, a worthy companion of the table, is the identifying feature of the landscape of the nearby village of Montecarlo, lying on the ridge of a hill designed by the rows of vines, is the acknowledged historical centre of local wine-growing. The name is a dedication. In 1331, the people of Lucca defeated the Florentines in an epic battle with the help of Emperor Charles V of Bohemia.

Now, in the streets of the village, one can listen to good music in peace in a very small theatre, enjoy the view from the Cerruglio rock, taste excellent local wines, stroll in the quiet streets of the village or in the surrounding woods where extraordinary encounters are made: the Carrara oak, the largest shade in Tuscany, the 'most beautiful oak in Italy', a tormented foliage, more than 40 metres tall, that touches the ground under the weight of witches and demons that have been gathering on its branches since the 15th century, the tree that inspired Collodi's episode of the murderers in Pinocchio.

What if it was the work of Leonardo?

A little further up, inside the austere parish church of San Gennaro is a precious early medieval pulpit and a terracotta angel, the only one, attributed by many critics to the hands of Leonardo da Vinci. From here, ascending towards the Pizzorne plateau, amidst chestnut and fir woods, we reach Villa Basilica along a road of ancient paper mills.

Since the Middle Ages, valuable blades and fine papers were produced here, on which great works were copied and later printed. The first Italian edition of the Enciclopedie, for example, in 1758 held in the Lucca public library.

At the foot of Monte Pisano, water and camellias

In the hills opposite, it is the Compitese area that gathers a group of villages at the foot of Monte Pisano. The fame of this area is mainly due to the numerous springs of very light water that all the inhabitants of the plain of Lucca are great admirers of, as well as the excellent extra virgin olive oil that is produced and pressed in this area.

The gentle touch is given by the camellias that were already cultivated in the 18th century and have become a characteristic feature of the gardens of historic villas and home gardens.