TOURING THE TOWERS, FORTRESSES AND CASTLES OF THE LUCCA PLAIN 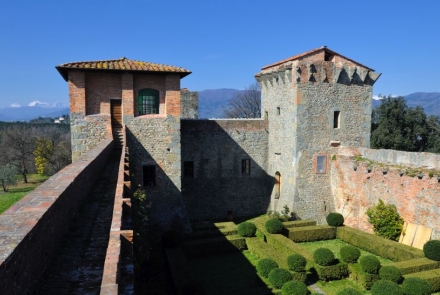 A journey through towers, fortresses and castles, fortified villages of the Piana di Lucca, fascinating landscapes of the medieval history of Tuscany.

Of the quarrelsome and parochial medieval and renaissance Tuscany, numerous fortifications and fortified villages remain, and the Plain of Lucca is no less so. The mighty Renaissance walls of the city of Lucca bear witness to this and are only the conclusion of a history lived 'in defence' The first city wall dates back to the time of its foundation and is still recognisable in its layout within the complex urban design of the city.
The second wall from the medieval period emerges more decisively on the entire eastern side in correspondence with today's Via dei Fossi with the towers of the Porta San Gervaso gate and, a little further north with those of the Porta di Borgo gate.

The Renaissance walls, which have escaped many vicissitudes and a few military clashes, are today the most original of urban parks, a ring of more than 4 kilometres suspended 12 metres above the city, embellished with tree-lined avenues of local and exotic species.

Small castles and fortified villages stand on the hilltops, on the spurs in relief on the plain, on the narrows that provide access to this small plain, recalling these turbulent past eras and the frequent clashes.

Two fortifications control the narrows that connect the plain of Lucca to that of Bientina. They are the fortified village of Castelvecchio di Compito on a spur of Mount Pisano and the fortress of Montecarlo, rebuilt and reinforced several times to testify to the strategic position between the plain of Lucca and the Valdinievole. Further down, at the threshold of this passage, the Hospitale di Altopascio was also surrounded by walls.

On the opposite side of the plain, towards the coast, guarding the narrows of Ripafratta, is the small fortified village of Nozzano, which every year, for a long weekend in September, moves back in time to experience the medieval atmosphere. A little higher up, on the other bank of the Serchio river, the Pisan fortress of Ripafratta contrasts with it.

An articulated communication system made of towers, emplacements and other castles, fires and luminous refractions, the 'Eye of Lucca', allowed to protect the entire plain and go further, creeping into the Serchio Valley, until reaching the possessions of Lucca.