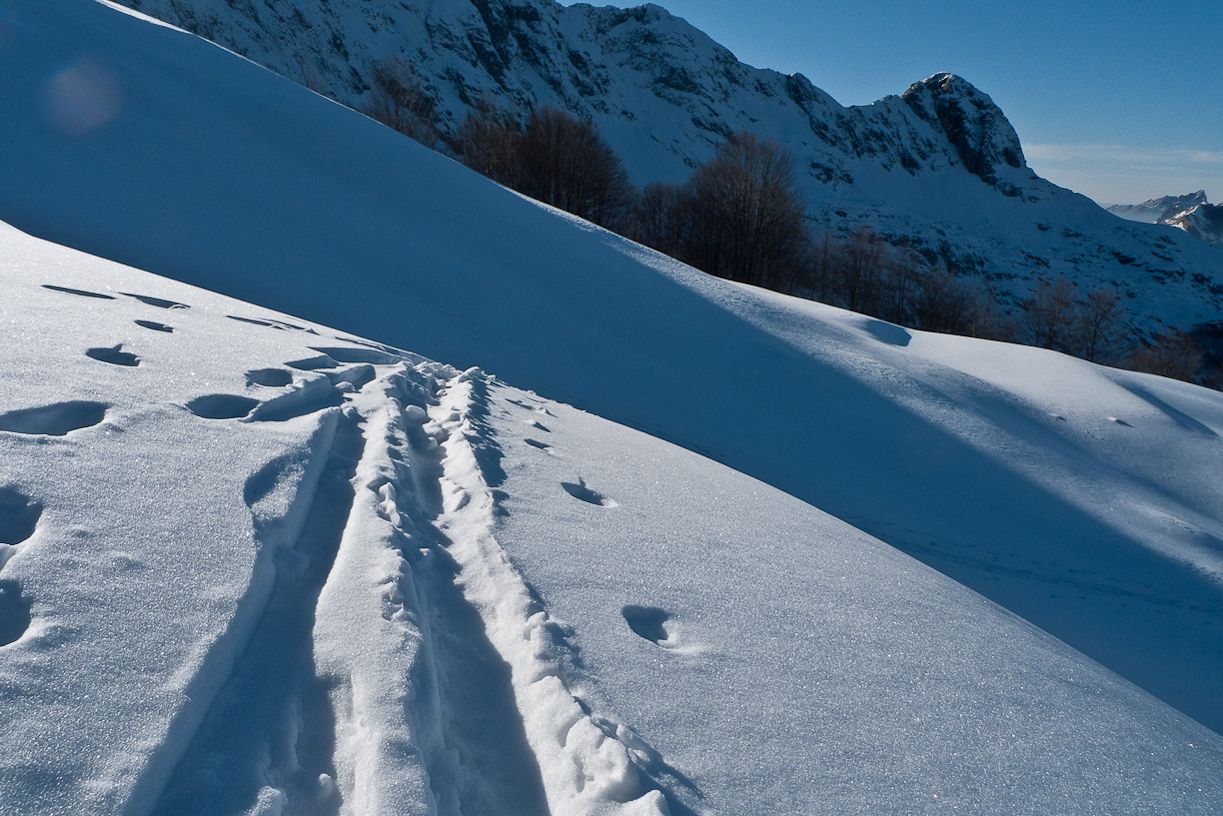 January, promenades on the mountain

Apuan Alps or Apennine? The reassuring meadows pastures of the Tuscan Emilian Apennines or the "magic" places and landscapes of the Apuan Alps, mountains with sea views? The first days of January are perfect for an invigorating excursion in the mountains, well covered to enjoy the cold winter air with the certainty that at the end you will find... a good table to eat with local products and handicrafts.

A few kilometers from the walled city, entering the Serchio valley, you can reach the peaks that can be seen in the distance from the walk of the city walls of Lucca, which are the unmistakable profile of the mountains of Lucca and the mountain landscape particularly striking in winter, hoping maybe in some beautiful snowfall.

Apuan Alps or Apennines for the January walks in two proposals from the local environmental guides.

A great classic on the Tuscan-Emilian Apennines

is the snowshoe walk in San Pellegrino in Alpe, on 12 and 13 January. You leave the village to reach the Burigone refuge, a bastion of hospitality at high altitude: excellent wine and traditional food are the well-deserved refreshment for those who have faced the walk, perhaps under the snow, and for those who want to take part in the torchlight procession at night along the path leading to the mountain pasture.

San Pellegrino in Alpe is a small town straddling the Apennines, divided between two municipalities, two provinces, two regions. Few inhabitants would ever give up the beautiful mountain views and every summer they welcome visitors and shepherds with their flocks to the summer pastures. A small village but full of history. It is here that for years the San Pellegrino lived inside the trunk of a large beech tree, it is said, in the company of San Bianco with whom he still shares the burial, even the one straddling the borders inside the Sanctuary.
(for all info wildtrails:info@guidewildtrails.com o Stefano 320 2672533)

On the marine side of the Apuan Alps

Instead, the New Year is celebrated with the Men of the Snow and the Epiphany of the Pennate, waiting for the sunrise of the Sun that appears between Mount Ninth and Mount Procinto at the site of the "Pennati di Trogna", where the ancient symbols of the Pennate are engraved on the rock.

The pennate, together with the ronca is a tool already attribute of the Etruscan-Roman God, "Silvano", the lord of the forest, invoked in wild places to assist in the working of the land and trees. The oldest representation of this divinity, found in the archaeological area of Scansano (Grosseto) and datable to the 4th-3rd century BC, testifies to the cultural proximity of the Ligurian and Etruscan populations.
A standing male figurine holding a pennate in his right hand as well as a pennate hold the weights depicted in the famous Ligurian statue stele  that can be admired in various archaeological sites and museums in the Apuan mountains.

These engravings have no other counterparts in the European landscape of rock engravings. You can recognize numerous pennates, some isolated, others crossed with each other, and then crosses, holes, other mysterious signs. Some can be seen very well, others a little less so, but by wetting the rock they will become more visible.

The site can be reached by an easy footpath that, from the church of Cardoso di Stazzema, in 35 minutes leads to the rocky ridge of Trogna with its 43 pennati where at 10:00 a.m. the Sun will appear and illuminate it with new light.
The guides suggest to bring darkened lenses to observe the Sun and, for those who have one, also their own pennate because during the day you can take advantage of the presence of the artisan grinder of Agricola Fatti col Pennato to sharpen them with the pedal grinding wheel.

At the end of the "show", a short walk of about 15 minutes, leads to the small Sanctuary of S. Leonardo di Noblac, the Merovingian saint invoked by the High Middle Ages as protector and liberator of those who are unjustly imprisoned where there will be the ...super breakfast Ligure-Apuana prepared by the Trattoria Peposo di Pietrasanta, with hot dishes of pissed with cabbage frascone al paiolo on chestnut wood, peposo in earthenware cooked in ash wood and ciacci di fiore (focaccette) cooked in cast iron texts with cold cuts of cardoso and cheese. (Per informazioni Apuantrek Stefano 3381399107. Francesco 3281590730)