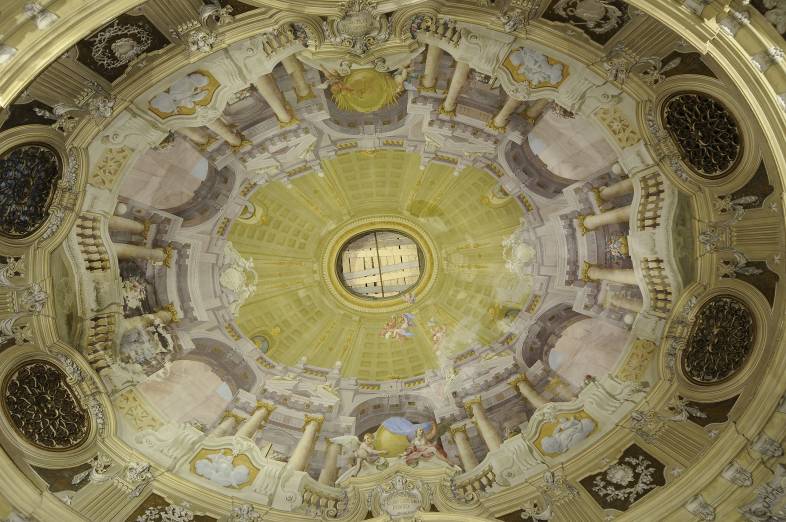 At the end of the 19th century the big building of the tobacco factory in Lucca employed hundreds of people. The female cigar makers of Lucca became famous for their ability to make the famous "stortignaccolo" which, actually realized because of an accident, got immediately famous.
Those women came from the countryside and used to gather in the morning before work in the small church of Santa Caterina, one of the most beautiful examples of Baroque architecture in Lucca, that became the so-called

church of the cigar makers.Built on a street corner, projected with an oval plan, the façade is modeled on the curve of the road, while the interior surprisingly opens up to a room sheltered by a large golden dome. It was built, radically changing a previous construction, between 1738 and 1748, by Francesco Pini and now, after the restoration carried out by the Italian heritage trust, has received the donation of a new work by the painter Giovanni Lorenzetti Fusari from Lucca and funded entirely by a private anonymous sponsor.

The Madonna del Rosario is one of the most popular and widespread sacred iconographies in Western art. The painting has an oval shape realized by the artist with the oil technique to occupy and compensate the space left empty for about forty years after the stealing of the original canvas on the left altar.

regains visual unity according to the monumental context of the building and its furnishings through the traditional pictorial style typical of one of the most appreciated local artists.

the author of the painting, is born in Lucca in 1952, completed his studies at the Art high school of Lucca, where he now teaches pictorial disciplines, and the Academy of Fine Arts in Florence. In the 70s and 80s he participated in personal exhibitions and contemporary art fairs in Italy and abroad. In 2000 he executed for Bernardo Bertolucci the miniatures for the film "The triumph of love", and from the 80s until 2000, he worked on many public commissions: altarpieces, mosaics and stained glass windows. Today he constantly collaborates with various art galleries in the regions of Puglia, Marche and Emilia.