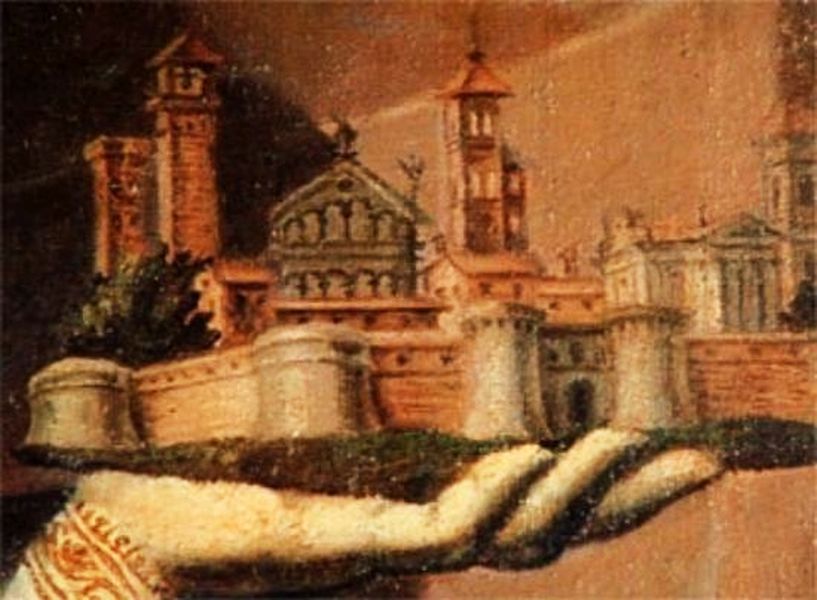 July 12, the feast of San Paolino, patron saint of Lucca, is approaching.
Paola Moschini, from the Lucca Info & Guide Tourist Guide Association tells us some interesting details about it.

Lucca is a city with some exceptions that make it a special place. Once you arrive in the central square, right in the heart of the original Roman colony, founded in 180 BC, the church visitors are in front of is not the Cathedral as they would expect, but it is the Church of San Michele. Wandering and getting lost in the narrow and shady streets, at a certain point the Cathedral appears, with the original porch and a knight in the act of cutting a cloak on the facade; this detail often misdirects visitors, presuming that San Martino, the generous  Roman soldier, might be the patron of the city, but he is not. A home for two

The protector of the Republic of Lucca is the least known Saint Paolino. There is no sure information about his life and existence as the first bishop of Lucca who, according to legend, was sent by St. Peter himself to convert the inhabitants of the town. It was the time of Nero and of the Christian persecutions and the young Paulino died of martyrdom. The still existing church with a linear white limestone facade, which rises in the western part of the city, was rebuilt in early 1515 and is today the only Renaissance church in Lucca.

To tell the truth it is not only the "home" of the patron Paolino, but also of San Donato, who became homeless when the outer village was demolished with the project of the Tagliate area and the new Renaissance city wall was built. So the Florentine Baccio da Montelupo built a house for two on commission.

The fact is that only a few people know about this double name of the church and also the statues on the facade seem to be almost twins... Is San Paolino the one on the right with his hand on his chest and looking towards the sky and San Donato the one on the left that points outwards, as if to say his origin is from outside the walls?

The two bishops, however, can be seen together also above a gate of the walls, simply known as Porta San Donato, one of the three original gates. In this case, San Paolino is easily recognizable because he is with a putto holding a walled Lucca miniature in his hand. Crossbows and cannons between present and past

The patron saint's celebrations have always been important for the city life. From the Middle Ages, the so-called San Paolino Days have been held in Lucca with parades, concerts, exhibitions, religious celebrations and candle-light processions, culminating with the day of the Palio on July 12th. And here we are again with the exceptions: no districts, but terzieri (San Martino, San Paolino and San Salvatore) competing, not in a horse race, but in a crossbow shooting challenge.

Still today skilled men and even a few women in Joan d'Arc style challenge each other following the ancient Ordo Pro Balistarii, a regulation providing that each lightning gun shoots its rod, signed with the name, to a target called rotella (wheel) or segno (sign) placed at a distance of 36 meters and its aim as a medieval sniper makes the arrow arrive as close as possible to the center, the "brocca". It may seem obvious, but from here derives the - quite Tuscan - expression “averla imbroccata” (to hit the target) ... The holiness of Bishop Paolino was revealed, however, only many years after his death, in the mid-1600s, during the celebrations for the patron, at one of the most expected and appreciated events: the Gazzarra delle Artiglierie. The citizens gathered on the walls, at the San Donato bulwark and the cannons loaded with blanks, fired just to make smoke and noise. Unfortunately, some bomber made a mistake and a loaded cannon burst into the crowd, but San Paolino from the top of the sky avoided the massacre. A canvas by the painter Gian Domenico Lombardi from Lucca, preserved in the Church of San Paolino, is a clear and interesting representation of the miracle. Obviously the Elders of the Republic justified the incident as a prodigious event to make citizens believe that the Patron Saint was watching over Lucca at any time, but also to show the enemies that a tragedy had been avoided because of the strong divine protection of the city.

There is also a technical-scientific explanation of a a charge of degraded gunpowder; however, this detail would ruin the charm of the story happened at a time when people mainly trusted in hope and faith, my dear contemporary traveler.

In fact, in 1631, the relics of San Paolino were exhibited in a parade on the walls and 160 cannons made so much noise that even the inhabitants of Pisa joined once to celebrate and pray for the end of the plague.