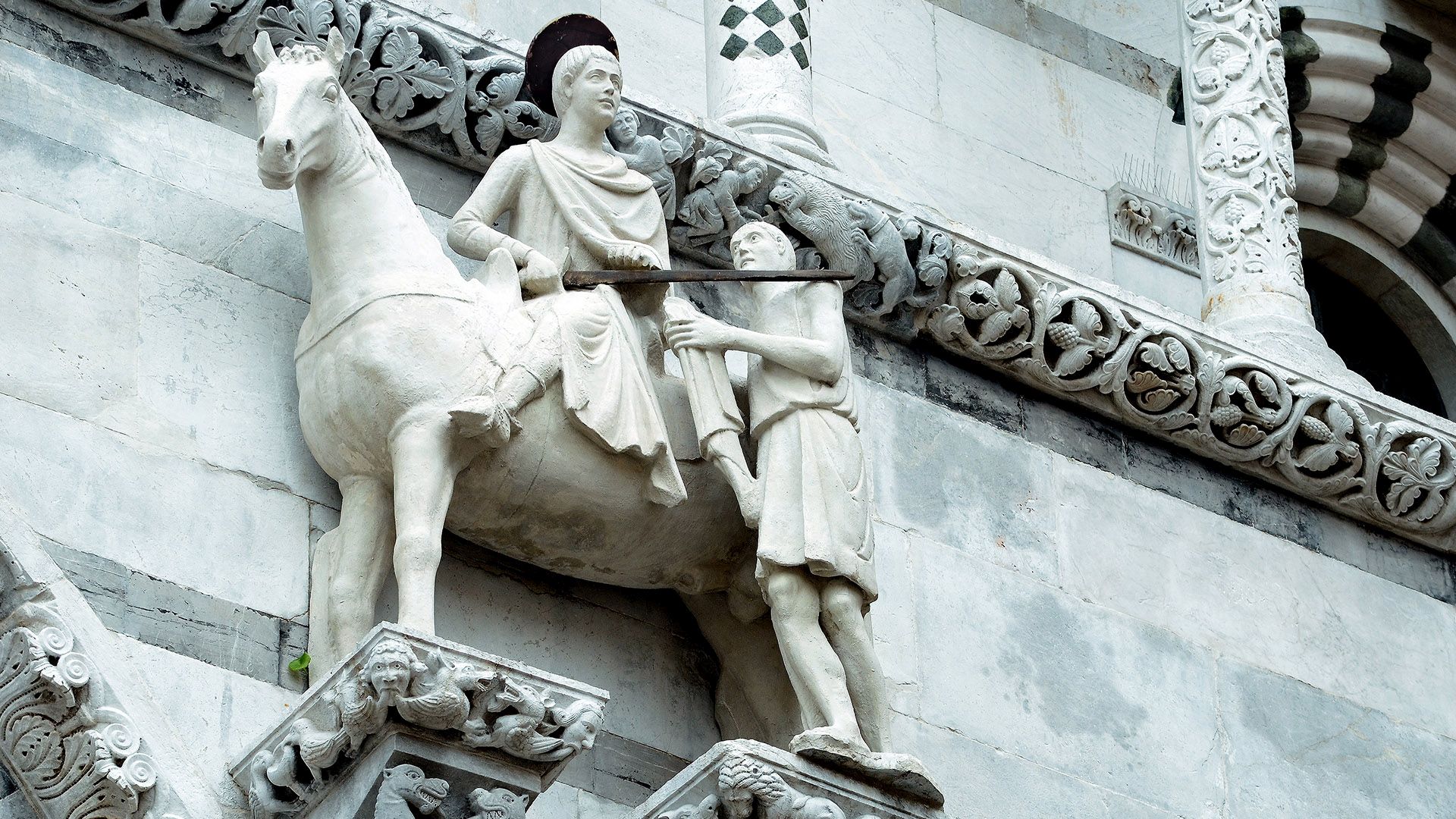 The summer of San Martino ...

In Lucca and its surroundings, San Martino has always been venerated since the Lombard period when religious cult was introduced, as well as other warrior and military saints. In the historic center the cathedral was dedicated to San Martino and many villages located in the hills and the Plain of Lucca bear the name of the saint and dedicated churches to him, to remember the close bond that he had in life with local farmers. It may be for this reason that in the atrium of the cathedral a special calendar  recalls the main works to do in the countryside to be most productive.

In the hills of San Martino in Vignale, for example, surrounded by olive groves, vineyards and oak woods,

and not far away, San Martino in Freddana, whose parish church rebuilt in 1904 in a lively eclectic style is also dedicated to our saint.
On the opposite side (north-east), San Martino in Colle, famous for the presence of the majestic and legendary Oak of the Witches, a monumental 600 year old tree with a crown of over 40 meters in diameter.
Many places should be seen for the first time or get rediscovered, while walking slowly through the narrow city streets or paths in the nature, illuminated by the warm and intense colors of autumn.

Saint Martin of Tours is the patron saint of France, of the Pontifical Swiss Guards, of beggars, hoteliers and knights. Everyone knows the story of Martin, a Roman soldier and imperial guard in the city of Amiens, in Gaul.

On a cold day, on a horseback ride,

he met a half-naked and suffering beggar. Feeling pity for him, he took his sword and cut his military cloak in half, giving a part of it to the poor man. The following night, in a dream, Jesus appeared to him, covered with half of his cloak. Martin converted, was baptized and became many years later the bishop of Tours.
He developped a strong devotion and passion for his mission as a "shepherd", especially in rural and agricultural areas.

Popular proverbs and sayings often refer to  rites and customs of the peasant tradition.

The summer of San Martino concerns the days in early November when the weather is usually still pleasant and relates to the episode of generosity towards the beggar, which caused even the clearing up of the sky and the raising of temperatures.
These days also coincide with the maturation period of winegrapes and since "a San Martino ogni mosto diventa vino" (in the days of San Martino every kind of must becomes wine), it's an occasion to come together and celebrate the fruits of the earth and have a toast with the new wine, accompanied by roasted chestnuts and a good Frantoiana soup with spicy fresh pressed olive oil.

So, Lucca has dedicated its most important church to San Martino,

the imposing cathedral in local Romanesque style, which turns 950 years old this year with celebrations and many initiatives.

A large statue depicting the saint of Tours on horseback while sharing his precious cloak with the poor man is one of the decorations that enrich the facade of the church.
One of the eleven bulwarks of the town wall is also dedicated to San Martino, between Porta San Jacopo and Porta Santa Maria. The illuminated underground tunnels, once storage rooms for weapons and ammunition, are very suggestive and now pedestrian walkways to enter the heart of the city. Above are located the remains of the gunboats and a singular tower of the old wall, incorporated into the new structure of the sixteenth-century bulwark.