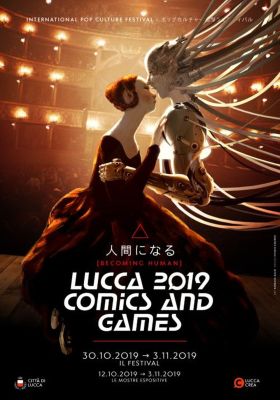 In the year of its 200th anniversary, the Teatro del Giglio is the monument chosen as the scene of the poster for the 2019 edition of Lucca Comics and Games.

After the Guinigi Tower, the Amphitheatre, the Walls and many other monumental buildings, it is the historic city theatre that will be the scene of a kiss that will go down in history between a charming girl who could be a Puccini heroine and an android in search of humanity.

in the theater that has always hosted the embraces of Lucca Comics & Games, where everything becomes possible. A kiss between human and and android, which gives life to that elective affinity between mortal creator and immortal creature, between author and opera, in full respect of the sense of gratitude that unites artist and fans; a true "revolution" (like the one of the 2014 theme), a gesture that goes over every wall or prejudice, worthy to be put on a stage: the one, historical and very prestigious, of the Teatro del Giglio in Lucca.

Built in 1675 as a public theatre, Giglio owes its current name to Maria Luisa di Borbone-Parma, sovereign of the city of Lucca, who in 1819, with a decree of 22 September, chose to give the theatre the name of Giglio, thus recalling the flower that adorns the Bourbon coat of arms.

at the Teatro Pubblico dates back to January 14, 1675, with the staging of the opera Annibale in Capua by Berengani and Ziani; Lucca was therefore also one of the first Italian cities to stage the new impresarial works, after the first Venetian and Roman successes.
The moments of activity of the city theatres extended throughout the year. During the Carnival and Autumn seasons the main protagonist was melodrama, whose performances attracted great performers to Lucca.

With the Napoleonic government of the early nineteenth century, in addition to the usual opera and prose performances, there were festivals, vigils, dances and events of political importance such as the first official proclamation of the French Republic in 1799.
The Duchess Maria Luisa and her son Ludovico were great supporters of the activities of the Teatro del Giglio. In 1819, with a decree of September 22nd, recalling the flower adorning the Bourbon coat of arms, she chose to give the theatre the name of

In Lucca, as in the rest of Italy, the theatre was one of the main centres of the city's cultural life. In 1831 the singer Gilbert Louis Duprez played Guglielmo Tell in the Italian version of Gioachino Rossini's opera. To solve a vocal passage in the final part of Arnoldo's great aria, he devised the use of the so-called "do di petto". Throughout the nineteenth century, therefore, the main theatre in Lucca was able to host the best Italian companies and the most famous names of the time, in stagings that in some cases could compete with those of the rest of Italy and Europe in number and quality.

awarded Gran Guinigi as Best Designer 2018, is the author of the poster and to whom a personal exhibition will be dedicated in the monumental rooms of the Ducal Palace.

In the visual field enter and are the protagonists the spectators, our "gold", not a simple background, but an added value to each edition "made in Lucca". In the audience, extraordinarily depicted in the poster 2019 there are four ambassadors of Lucca Comics & Games who will soon become the protagonists of a story illustrated by Barbara Baldi, written by Eleonora Caruso and screenwriter Giorgio Giusfredi. Fans have always been the heart of the festival. Four faces will turn into the new heroes of a great new adventure presented during the next edition of the festival. They will represent the hundreds of thousands of fans who have always fought for nothing outside the walls of Lucca, because the story continues.

is the question of this edition of the most important cross-media festival in Europe. Between virtual and real, between androids and fleshandbones.