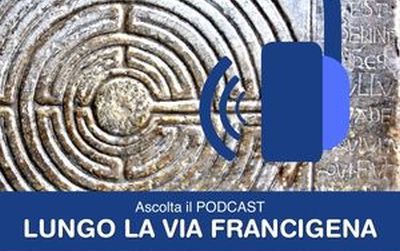 Along the Francigena route, stories on the road

The Via Francigena, history, culture and nature on the Lucca part of the route will be the protagonist of a podcast in Italian language.

Scholars and experts, but also those who live and "inhabit" the Via Francigena recount the characteristics of its landscape, nature, places and historical symbols, traditions and typical products that a pilgrim can encounter along the Lucca stretch of the route.

Five episodes from Sunday 16 January to 13 February to be listened to at home or ... on the road.

5 episodes that will be broadcast every Sunday morning at 10.35 am on Controradio (FM 98.9 in the provinces of Lucca, Pisa and Livorno; FM 93.6 in the provinces of Florence, Prato and Pistoia), from Sunday 16 January to Sunday 13 February, and after available on Loquis - Lungo al Francigena , the first travel podcasting that collects stories and information related to the places that surround us or that we can visit on foot, by car or by public transport.

January 16 - Da Camaiore a Lucca - From Camaiore to Lucca
The town of Campmaior, the XXVII stage of Sigeric's journey

January 23 - Arrivando a Lucca: il parco fluviale, le mura e l'ingresso in città - Arriving in Lucca: the river park, the city walls and the entrance to the city
The inner dimension of pilgrimage

Interview with: Mons. Paolo Giulietti, Archbishop of Lucca
A stone's throw from the center, the river park and its ecosystem
Interview with: Arianna Chines, biologist
The city of Lucca, history
Francesco Niccoli, archaeologist
Discovering the places of pilgrims
Paola Moschini, tour guide

Interview with: Riccardo Massagli, art historian and Francesco Niccoli, Museum and Archaeological Center of the Cathedral of Lucca
The Volto Santo cross of Lucca
Interview with: Ilaria Sabbatini, medievalist and scientific director of the Digital Archive of the Volto Santo
The labyrinth of divine love
Interview with: Gabriele Calabrese, tour guide
The story of Ilaria del Carretto
The story told by the actress Elisabetta Salvadori

February 6 - Alla scoperta della città di Lucca, storie e curiosità - Discovering the city of Lucca, stories and curiosities
The image of the Volto Santo on the coins of Lucca

February 13 - Da Lucca ad Altopascio - From Lucca to Altopascio
Crossing the Lucca countryside towards the hospitale del Tau.
Interview with: Samanta Cesaretti, hiker and president of the Sentieri di Felicità Association
The Nottolini aqueduct, its imposing arches and the Parole d'Oro source
Interview with: Gabriele Calabrese, tour guide
Badia Pozzeveri, a place of exchange and passage of the Via Francigena
Interview with: Antonio Fornaciari, archaeologist
The tradition and the recovery of the ancient species of legumes grown in the Lucca area
Interview with: Marco del Pistoia, agronomist
Compitese olive oil
Interview with: Claudio Orsi, producer of the area