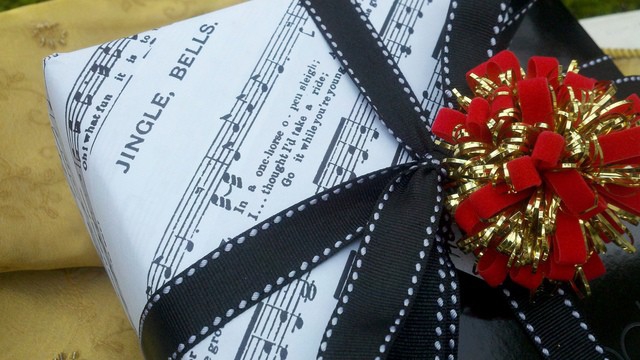 An inviting program of Christmas Concerts with a great variety of styles, music from the local Christmas traditions of Lucca, but also traditions of other countries linked with them in this particular time of the year with a special Christmas holiday soundtrack.
Music resounds in theaters, churches, auditoriums and even outdoors in the squares. Also in Lucca, the city of music, the Christmas period is characterized by a tribute to Giacomo Puccini.

From November 18 to December 22 Lucca, i giorni di Puccini - Puccini Days, a festival dedicated to Lucca's most illustrious citizen, offers an interesting mix of appointments dedicated to the Maestro, with internationally renowned artists, conferences and side events. Inspired by this special soundtrack, you can take advantage of a visit to Puccini's places, starting from the birth house in Corte san Lorenzo.

Other places and other times

Different traditions, in Italy and Korea, but the same passion for music meet in the Arirang Festival, on November 29th under the loggia of the Palazzo Pretorio and until December 1st, at the Auditorium of the Boccherini music school.
The festival takes its name from a Korean song, UNESCO cultural heritage, dating back to more than 600 years ago and includes performances by groups of dancers, musicians and Korean artists, in collaboration with the youth orchestra of the Boccherini Music school, with some young students from the Jam music school and the Vivi & Danza dance school.

One of the most expected Christmas concerts is performed by the Joyful Angels Gospel Choir from Lucca, directed by Maestro Andrea Salvoni, accompagnied on the piano by Eva Spadoni, including 35 singers from all over the province with choristers of 12 different nationalities and different religious cultures (Protestant, Catholic, Orthodox and Jewish). A beautiful message of brotherhood and cohabitation that is even more powerful in the Christmas period. The group will bring great emotions in two dates: December 7 at 9:00 pm at the Auditorium San Francesco di Lucca in collaboration and in support of the Green Cross. On December 9th at 5:30 pm, relpy in Montefegatesi.

Arias of the early 20th century are proposed by the Musica Amica association with "La Belle Epoque in a lounge of the early twentieth century", on December 2 at the Auditorium of Agorà.

Music from Northern Europe for the show "Un canto di Natale" proposed by Anastasia and Daniele of the group La Dama and the Unicorno, inspired by the classic Anglo-Saxon novel. The five original rooms of "A Christmas Carol" by Charles Dickens appropriately reduced, will be dramatized and accompanied by famous pieces of the irish and british Christmas tradition: Good King Wenceslaw, Coventry Carol, Noel Nouvelet, Silent Night, Cherry Tree Carol, The Holly and the Ivy , Breton Carol, Noel The two street performers make their debut on December 8th at the Art and wits market in San Paolino, and replicate on December 15th and 16th at 4pm in Piazza dei Cocomeri, on December 22nd and 23rd at Palazzo Pretorio, in Piazza San Michele.

More Gospel music on December 8th from 9:30 pm to 11:30 pm at GreenheArt - Gardens & Lifestyle, in via di Picciorana 262 / A in Lucca. Christmas Concert for charity in favor of the anti-violence center "Associazione Luna Onlus" of Lucca with the local choir "Canticum Novum Gospel Choir", which will perform traditional Gospel, Spiritual and International Christmas songs.

Ladies and gentlemen, the marching band!

On December 2 under the Loggia of the Palazzo Pretorio arrives also the Marching Band of Lucca, with a music contribution to the Christmas atmosphere, for the first of the side events of Lucca, the days of Puccini - Puccini Days presenting Puccini's favorite music.

On December 7th at 9.00pm the Giacomo Puccini band arrives also at the Suffrage auditorium for Christmas in Music. The band  "La Castellana" Folk Group is also composed by the Majorettes dance corps and the percussion section, which has selected a selection of Christmas music, folk songs and folk songs from its vast repertoire.

Like every year on December 8th, the Amici di Catalani club organizes the usual "Christmas wishes Concert" which closes the annual musical activities of the Club. At 5.30 pm, in the Hall of the fresco of the San Micheletto Complex, a singular afternoon entitled "Musica e danza in armoniat", opera arias danced and sung with music by Alfredo Catalani and Giacomo Puccini, including dance, vocal and instrumental music, through a sequence of songs with music by Alfredo Catalani and Giacomo Puccini: another occasion to remember the 160th anniversary of the latter's birth. Admission to the concert is free subject to availability. Telephone reservations are mandatory (+39 347 9951581)

At the Casermetta S.Pietro, guests of the Balestrieri company on the 8th, 15th, 22nd, 29th December and Sunday 6th January at 4.30pm, the Baluardo vocal group from Lucca invites everyone to Cantiamo il Natale, a review with the Polyphonic group Amici della Migliarina, the Giacomo Puccini choir of Camigliano, the Polygon group of Gallicano, the Freedom Singers, The Baluardo vocal group of Lucca and the children of the Coro del Sole, the Canticum Novum, the Voci del Serchio, the choir Don Vittorio Landucci of San Vito and the Chorus of the Cultural Circle of San Francesco di Pisa.

The orchestra of one of the most prestigious universities in the world, the American Dartmouth College, and the Orchestra toscana dei conservatori (Otc) in concert in Lucca, for the penultimate stage of the tour around Tuscany. Appointment on Monday 10 December, at 9.00 pm in the San Francesco auditorium, to listen to over 70 musicians of the two groups, directed by Maestro Filippo Ciabatti, in the performance of the Fifth Symphony by Gustav Mahler, Crisantemi di Puccini and A sera by A. Catalani.

The traditional appointment with the Christmas Concert of the "L. Boccherini " school, is on December 15 at 18:00. Christmas wishes addressed to all citizens before the beginning of the holiday period, realized this year in collaboration with "Andare Oltre si può", the benefit association that is also the author of the installation Christmas Light in Piazza San Michele. As usual, the orchestra of the Lucca Conservatory is the protagonist, for the occasion with the violinist Da Won Ghang and the flutist Agnese Manfredini, both students of the school under the direction of GianPaolo Mazzoli.

Certainly classical, but performed by the very young Carlotta Dalia, winner of the Fidapa 2018 (Italian Federation of professional arts and business women BPW Italy) is the Christmas concert of the Boccherini Music school on Thursday, 13 December at 9:00 pm at the ISSM Auditorium Boccherini. Before the concert, the award ceremony.

A well-established tradition is the Christmas concert of the Filarmonica "Gaetano Luporini" of San Gennaro in the Church of San Francesco, this year on Sunday 16 December with a new great show. The protagonists are Charlotte Ferradini and Gatto Panceri who will perform classical Christmas songs: from "Stille nacht" to "What a Wonderful world", from "Stand by me" to "Over the rainbow".

In Sant'Angelo in Campo the powerful pipe organ recently restored for the traditional Christmas Concert on 19 December at 9:00 pm with the organist Enrico Barsanti, accompanied by a quintet of flutes. In the evening there will also be space for lyrical music with tenor Tommaso Martinella, baritone Franco Cerri and soprano Alida Berti.

In the church of San Paolino, the patron saint of Lucca, the Christmas concert ithe students of the music high school on December 19 at 9:00 pm in the church where he played, still a student, the young Giacomo Puccini.

The auditorium of San Francesco will host some concerts: on December 21st at 9.00pm, the Automobile Club of Lucca organizes a Christmas Concert in collaboration with the Associazione Musicale Lucchese. On stage the Ensemble Vivaldi coming from the "Solisti Veneti". The Four Seasons by Vivaldi, the Concerto per la Notte di Natale by Corelli and a "tribute" to Giacomo Puccini are scheduled. (for reservations +39 0583 50541) and on December 22nd the organized Christmas Concert of the association paesi e quartieri di Lucca.

Saturday 22 at 5:30 pm at the Teatro di San Girolamo is Autumn in Music with the opera Suor Angelica by G. Puccini edited by the Brunier Laboratory Association.

Also on 22 December 2018 at 21:00, at the fresco hall in the monumental complex of San Micheletto, the Luigi Boccherini Chamber Orchestra will wish a merry Christmas to the citizens in a Christmas Concert with Music by J.S. Bach, F. X. Geminiani, G.P. Telemann, A. Vivaldi.

December 15 with music for the dance flash mob of the European Dance Association, side event of the festival, the days of Puccini - Puccini Days in Piazza Cittadella, Piazza San Michele and Piazza dei Mercanti.

The 24th of December is celebrated at 24:00 by the Passionist Fathers and by the artists of the Academy of Montegral directed by Gustav Kuhn, the Christmas Mass at the Convento dell'Angelo in Ponte a Moriano. Christmas carols and pieces by J.S. Bach, W.A. Mozart, G. Puccini, G. Rossini, C. Franck. G. Bizet, F. Händel, F. Liszt, A. Vivaldi, P. Mascagni and S. Adams. As every year a free shuttle service will be available from the Ponte a Moriano parking lot (behind the theater) starting at 10:30 pm and returning from 01:00 onwards. (For more information - 0039 0583 406300)

On Monday, December 31st from 9.00 pm, the year ends in the name of Puccini with the Gran Gala Lirico. From 8.45 pm Great buffet dinner with Aperitifs, Hot Primi, Carni, Buffet Dolci & Champagne accompanied by the Puccini Solists and his Lucca Festival, the Osmann Gold Swing Orchestra with an amazing program from Glenn Miller to Duke Ellington and beyond, the Lucca Philharmonic Orchestra in Triumph of Waltzes - Triumph of Waltz with music by Puccini, Lehar, Strauss and other Soloists: Francesca Maionchi, Nicola Simone Mugnaini, Giovanni Cervelli and many others. Director: Andrea Colombini; solo guitar and various jokes, Meme Lucarelli (from 23.30 to 01.30)
(reservations +39 340 8106042 or segreteria@puccinielasualucca.com)

On January 1, 2020, the New Year's Concert is one of the most anticipated and popular events of the Teatro del Giglio. At 5:00pm with an intense musical excursus for solo voices and orchestra through the beautiful melodies of Johann Strauss Jr., Franz Lehár, Nino Rota and Giacomo Puccini, back for an afternoon in music that will not fail to excite.