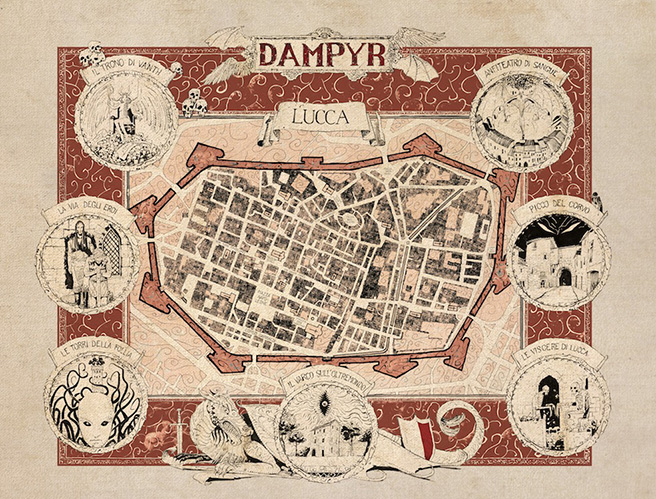 Countdown to the most important European cross-media event, dedicated to the world of comics, games and videogames, illustration and fantasy literature, intelligent entertainment. Only 20 days until the start of the 2018 edition of Lucca Comics & Games (from October 31 to November 4) the event organized by Lucca Crea Srl together with the City of Lucca, and other, this year brings to international attention not only the city but also the "Made in Italy", the true engine of the country even when you look at it under the lens of fantasy and creativity.

Not to forget the great contemporary masters, Lucca Comics & Games in recent years has accustomed us to a selection of "pencils" and creative, from writing, animation, digital art, which leads us by the hand to see and understand who will be the masters of tomorrow. This happens in particular with the exhibitions: in addition to the seven monographic ones that open on Saturday, others are distributed in the city, from the Chiesa dei Servi to the Palazzo delle Esposizioni of the Banca del Monte di Lucca Foundation.

The important announcements follow one another from day to day. Here are some previews of the many surprises scheduled between events, meetings, concerts, and important previews.

The realm of comics, synonymous with great comic book publishing is also this year the area that goes from Piazza Napoleone to Piazza San Martino, passing through Corso Garibaldi and Piazza San Giovanni. And the tradition is confirmed also this year with all the main Italian comics publishing houses, which will present their new publications and the dedications sessions of the authors.

One of the new squares of Lucca Comics & Games will be Piazza della Caserma, where the space dedicated to self-produced comics - the Self Area - and the varied world of Tech Princess - Pride Nerd, which will also host the signature sessions of the Comics & Science event, will be located. Two new pavilions that further enhance the comics content at Lucca Comics & Games.

The worlds of board game and fantasy fiction will be undisputed masters in the Carducci Pavilion. In the largest marquee in Italy (over 9,000 square meters) are concentrated the protagonists of the board game, role-playing, collectables and miniatures: from CoolMiniOrNot to daVinci, from Asmodée to Giochi Uniti, passing through the return of Yu-Gi-Oh!, protagonist together with Magic The Gathering and Force of Will of the world of Trading Card Games. And Luk for Fantasy, the great area dedicated to art and fantasy, science fiction and horror publishing. In addition to the great masters of fantasy: the return of Fanucci, the confirmations of Mondadori and the Mauri Spagnol publishing group and a very strong and growing publishing sector.

The great video game will be in Piazza Santa Maria, where there will be a pavilion contained in the spaces but very attractive. Great guest Jean Alesi, with the "Jean Alesi eSports Academy", the first big operation dedicated to talent scouting for professional videogamers.

In the spaces of the Cavallerizza and the surrounding areas there are numerous companies from the worlds of videogames and technology: a real technological hub, the one created around the Cavallerizza and Piazzale San Donato, which last year proved to attract tens of thousands of visitors. The new "The Bit District" in Piazzale San Donato, with over 1,000 square meters, becomes one of the main pavilions of the event. A place where the videogame world will find its largest dimension, with a strong openness to technology and the concept of "art & gaming", so in perfect symbiosis with Lucca Comics & Games and the Ancient Mint of Lucca will become "The Bit District Meeting Room", with music and videogame themed meetings.

The Bulwarks have now become the realm of the live role-playing game (The Citadel) of fandom (Street&Fun). The Walls of Lucca have always been the realm of live role-playing and free cosplay, but also of organized fandom. The entire historic center will be involved by the parades dedicated to the great stories told by comics, literature and cinema: parades, flash mobs and mash ups bring together from all over the country the passion "Made in Italy" and transform it into "Made in Lucca", in a peculiar artistic and cultural context.

Japan Town is still growing! The whole area between the area of San Francesco, via dei Bacchettoni, the Giardino degli Osservanti will once again host the Japanese district of Lucca Comics & Games, with all its peculiarities, including Giappò, the renovated gastronomic area. This year, fans of the great robots will not be disappointed at all: in fact, the Mecha District will inaugurate the Mecha District: to the east of the Garden of the Observants, it will inaugurate near the House of the Hangman, this district of Japan Town that will be characterized by the presence of products and activities involving the much-loved

Programma and maps are online

Hundreds of events are already available in dozens of locations throughout the historic center and many more will be announced in these 20 days that separate us from festivals. The entire program and the interactive map of Lucca Comics & Games 2018 is constantly updated and available online on the site www.luccacomicsandgames.com.