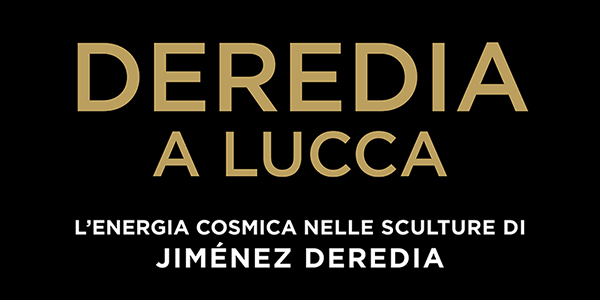 "Deredia in Lucca. The cosmic energy in the sculptures of Jiménez Deredia" From 28 April to 10 September 2018 Lucca will become an open-air exhibition, hosting the monumental works of the artist Jiménez Deredia in the main squares of the historic center. The circular and oval shapes present in the artist's works accompany the spectator in a fluid and harmonious path, inserted within the urban fabric. Jiménez Deredia presents a symbolic-transmutative sculpture of an organic character, which describes cosmic participation. The artist offers a spherical-circular vision of the human being through a series of "Genesis", which narrate time and space through the transformation of matter, which, according to Deredia leads us to "become aware that we are stardust in transmutation".

The City of Lucca, with its history and its culture, is the ideal setting to welcome the sculpture of Jiménez Deredia.

The city exhibition itinerary that will involve 7 different locations for the exhibition of 11 monumental works in plain air made of bronze and marble, in the main squares of the historic center of Lucca. In fact, they will become exhibition places with the exception of: Porta San Pietro, Piazzale Vittorio Emanuele (in front of the Antico Caffè delle Mura), Piazza del Giglio (in front of the Theater), Piazza San Michele (where 4 works will be installed), Piazza San Giovanni , Piazza Anfiteatro and Piazza San Martino.

At the same time, the event will also involve the Palazzo delle Esposizioni in Piazza San Martino 7, where the artist will exhibit 15 medium and small works, told through blow-ups and explanatory panels that will give an overall view of the thought and the artistic work of Jimenez Deredia.
This great event is part of an international circuit of monumental exhibitions that saw the master Jiménez Deredia as the absolute protagonist. Deredia in Lucca is the continuation of an exhibition that has crossed many cities, from Florence to Rome, from Valencia to Trapani, from Mexico City to Miami.

Opening hours: the works in the historical center can always be visited, and supported by didactic totems.
The Palazzo delle Esposizioni will follow the following schedule: Tuesday to Sunday from 3.30 to 7.30 pm.
Admission free.

From Sunday 3 June special guided tours of the exhibition "Deredia a Lucca". The cosmic energy in the sculptures of Jiménez Deredia ".

In June the visits will be held on Sunday 3, Saturday 9, Sunday 17 and Saturday 23.
At 4.00 pm guided tour of the works exhibited in the Palazzo delle Esposizioni (duration 50 minutes, at a cost of € 5.00)
at 17:00 walk to discover the sculptures in the city (duration 1 hour and a half, cost € 10.00) with an itinerary that starts from the Palazzo delle Esposizioni in Piazza San Martino to continue in Piazza San Giovanni, Piazza del Giglio, Porta San Pietro , Caffè delle Mura, Piazza San Michele, Piazza Anfiteatro.

A cumulative ticket is also provided for both visits (to the Palazzo delle Esposizioni and the city streets) for € 13.00