In a unique position between white marble rocks and green beech trees,

the Serchio valley is crossed by a river sourcing from an enchanted cave in the Apennines and from the highest peak of the Apuan Alps.

So many different atmospheres, flavours and colours involving all our senses like only special places with an immense naturalistic and historical value can do, telling us about their history made of great events, battles and castles, but also of common stories of work, everyday life or the change of seasons. passing through the mountains and woods in a sensational scenery of fortresses built, demolished, conquered and rebuilt by various neighbouring towns, and precious marble quarries appreciated all over the world, thunderous waters of rivers and streams, artistic treasures to be discovered in the silent churches of the villages, large paintings commissioned to famous artists, tiny mountain theatres, roadside shrines, chestnut groves, but also the prehistoric treasures of the Stele statues.

A land of stories which hosted great poets, a place of encounter and confrontation, of wolves and brigands, witches, wild men, goblins and all sorts of demons, perfect for a story to be told in front of the fireplace in a cold winter. 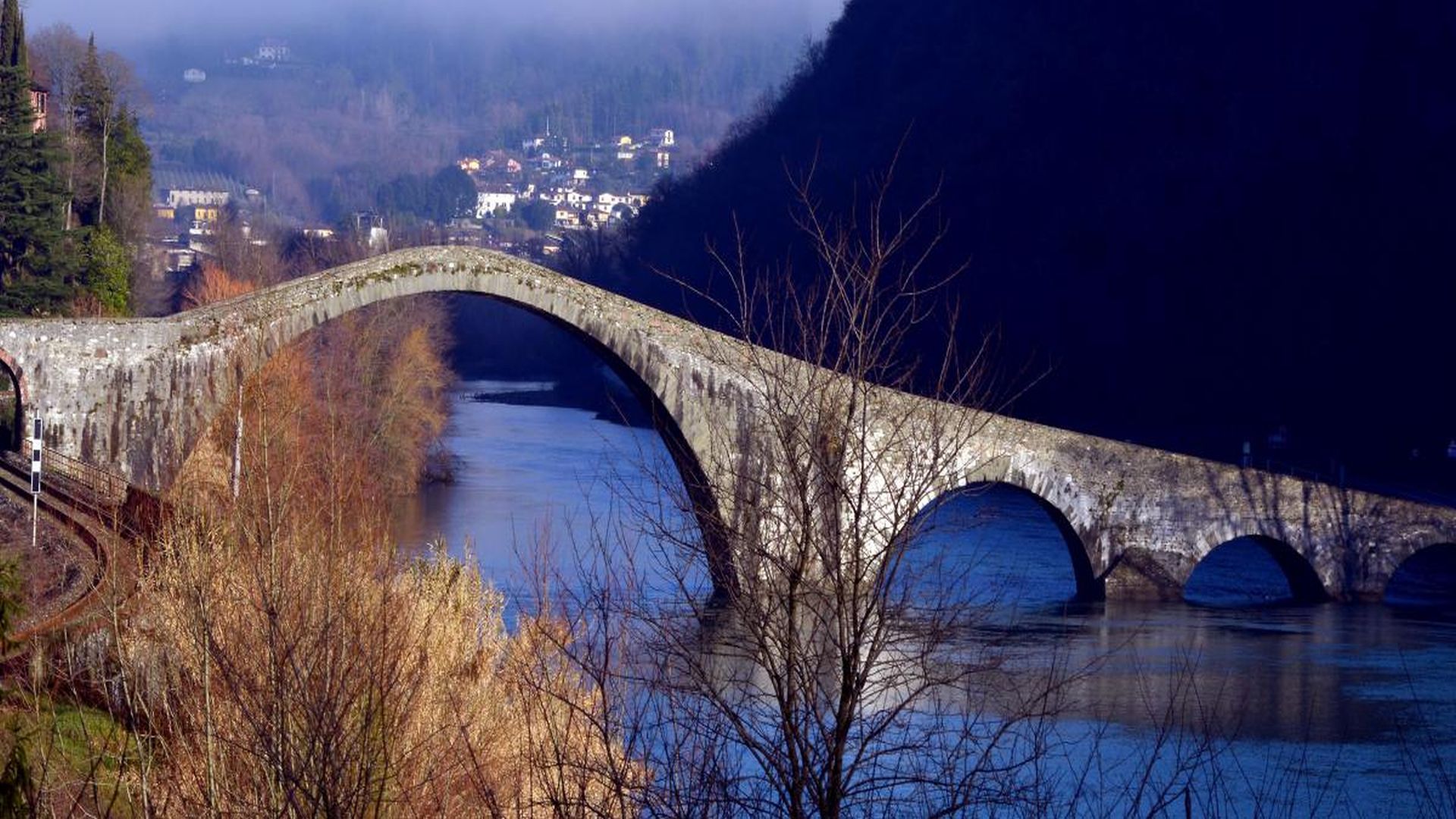 commented the historian Cesare Sardi about the fact that especially in the nineteenth century the thermal baths of Bagni di Lucca attracted aristocrats from all over Europe: Frederick II, Liszt, Paganini, Rossini, Strauss, Dumas, Puccini, Montaigne, Byron, the Bonaparte family: this is just a part of the guests who loved to spend their time in the Bagni Caldi hot springs, already appreciated by the Romans, Matilde di Canossa and Castruccio Castracani, who built the bridges to allow travellers to reach them.

The warm water is rich in minerals, clear and odourless gushing at 54 °C in the warmest spring in the great cave of the Varraud plant, and at 38 °C in the "cova", the fountain on the riverside promenade.

From the Bernabò terrace you can enjoy a beautiful view on the village composed of three parts: Ponte a Serraglio, the entrance to the village with the bridge built by Duke Leopold, the two powerful pillars and a wooden walkway of the chain bridge, groundbreaking in its shape and conception, and Villa, the elegant central area with eclectic residences and historic gardens; the Hotel de Russie, the Roma hotel that hosted Elisa Baciocchi, the casino and the Circolo dei Forestieri, Villa Fiori with its park full of terracotta statues and a view on the river, Villa Ada and the garden of secular plants and thermal water pools, Bagni Caldi, the thermal baths where the Russian prince Demidoff, grateful for the well-being after his stay, promoted the construction of the hospital, now the holistic medicine centre Villaggio Globale. The Lima river flows through elegant houses and nineteenth-century paper mills. 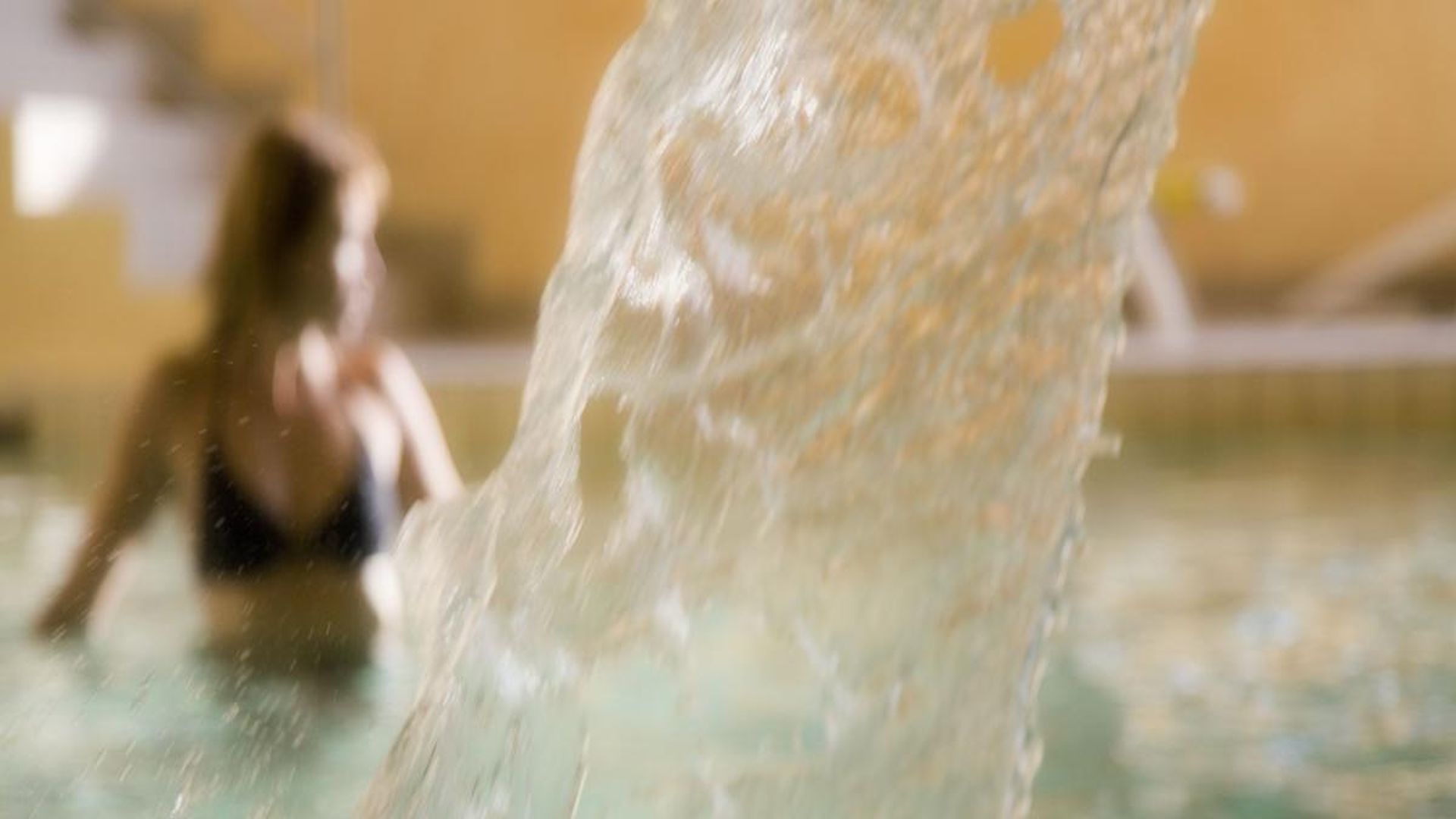 Strolling through the villages, searching for the atmosphere of seasons changing and slow life,

stepping on cobblestone, sunny squares and different panoramas. In the medieval mountain villages, the exploits of Castruccio Castracani, great leader and vicar of the Serchio valley, are still evident. From this strategic position the valley was controlled for centuries, because of endless conflicts between Pisa and Lucca, Pistoia and Modena.

On the Apennines there is the village of Barga, rebuilt in 1361, full of history and narrow streets climbing steeply up to the Duomo. Local disputes mark out the history of Coreglia Antelminelli until the fourteenth century when Castruccio finally built an unbreakable stronghold with beautiful pearly grey coloured palaces fully in tune with the local stone.

On the side of the Apuan Alps, from the narrow streets of Careggine, located on an extended plateau, the view opens up onto the wide panorama from Pratofiorito to the marble basin of Orto di Donna, ranging to the Pania mountains and further south to Colognora, a village made of stone in the midst of green and shady forests with thousand-year-old chestnut trees; and then there is Vetriano, a small town with a tiny theater: two tiers of boxes decorated with painted panels, the scene and a curtain. All in all just 70 square meters registered in the Guinness Book of Records.

On the valley floor, where the Serchio river meets its most important tributaries, several villages are located, like Borgo a Mozzano with the Lima river flowing in beyond the Maddalena bridge. The town, dominated by the ruins of the ancient keep of the Monte Bargiglio fortress, has beautiful paved streets, stone courtyards, magnificent churches, and elegant palaces.

In Castelnuovo Garfagnana the confluence with the Turrite river is dominated by the Castruccio bridge, along the medieval walls, leading to the centre of the village. At the confluence of the two main branches of the Serchio river, between volcanic rocks, a medieval bridge joins the villages of San Michele and Piazza al Serchio on a gorge of the Serchio di Soraggio river. 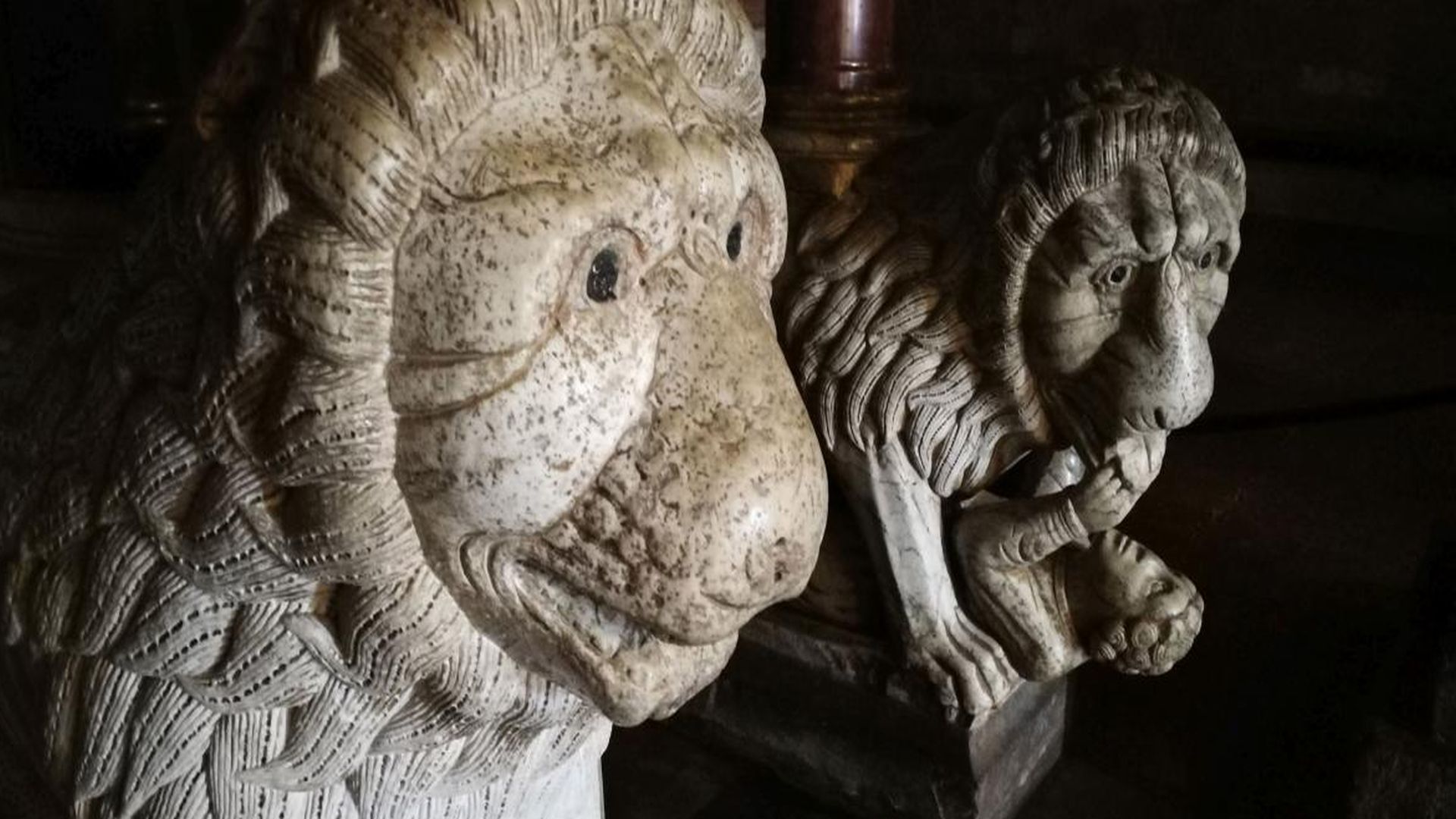 In the 16th century the Este dynasty ruled the Garfagnana region and the poet Ludovico Ariosto was appointed Commissioner of these lands by the Duke.

He was fascinated by the natural scenery that he also proposed in some of his works, and he put much effort into renewing and consolidating the defensive system, as required by the Duke, to protect the Este domains from Lucca.
Sillico was the first town of Garfagnana to accept the protection of Niccolò d'Este, thus avoiding the dominion of the Republic of Lucca, while Castiglione di Garfagnana, enclosed within a circle of walls with powerful towers, chose Lucca.
The fortresses of Montalfonso, of Camporgiano and Verrucole were the cornerstones of an invisible communication network, supported by many other small fortifications. But there is one thing they all have still in common: a breathtaking view on the mountains and the valley, in the fascinating atmosphere of a mysterious past.

In Castelnuovo Garfagnana, the Rocca Ariostesca fortress, where the poet Ariosto lived, is one of the access gates to the town, besides the other one represented by the equally important Castruccio bridge.
A little higher up, and some time after, the Montalfonso fortress was built. Just outside Castelnuovo, along the path dedicated to Ariosto, you can walk to the southern terraces of the walls enclosing the parade ground and the Duke's and the soldiers' buildings. From here a nice view opens up to the Camporgiano fortress and the surrounding village.
Opposite, on the Apennines, the Verrucole castle dominates the whole area. The history of Garfagnana took place inside these walls, and their unmistakable profile can be seen from the distance from many different perspectives. It can be reached by crossing the village of San Lorenzo along the crenellated path to the 2 forts. 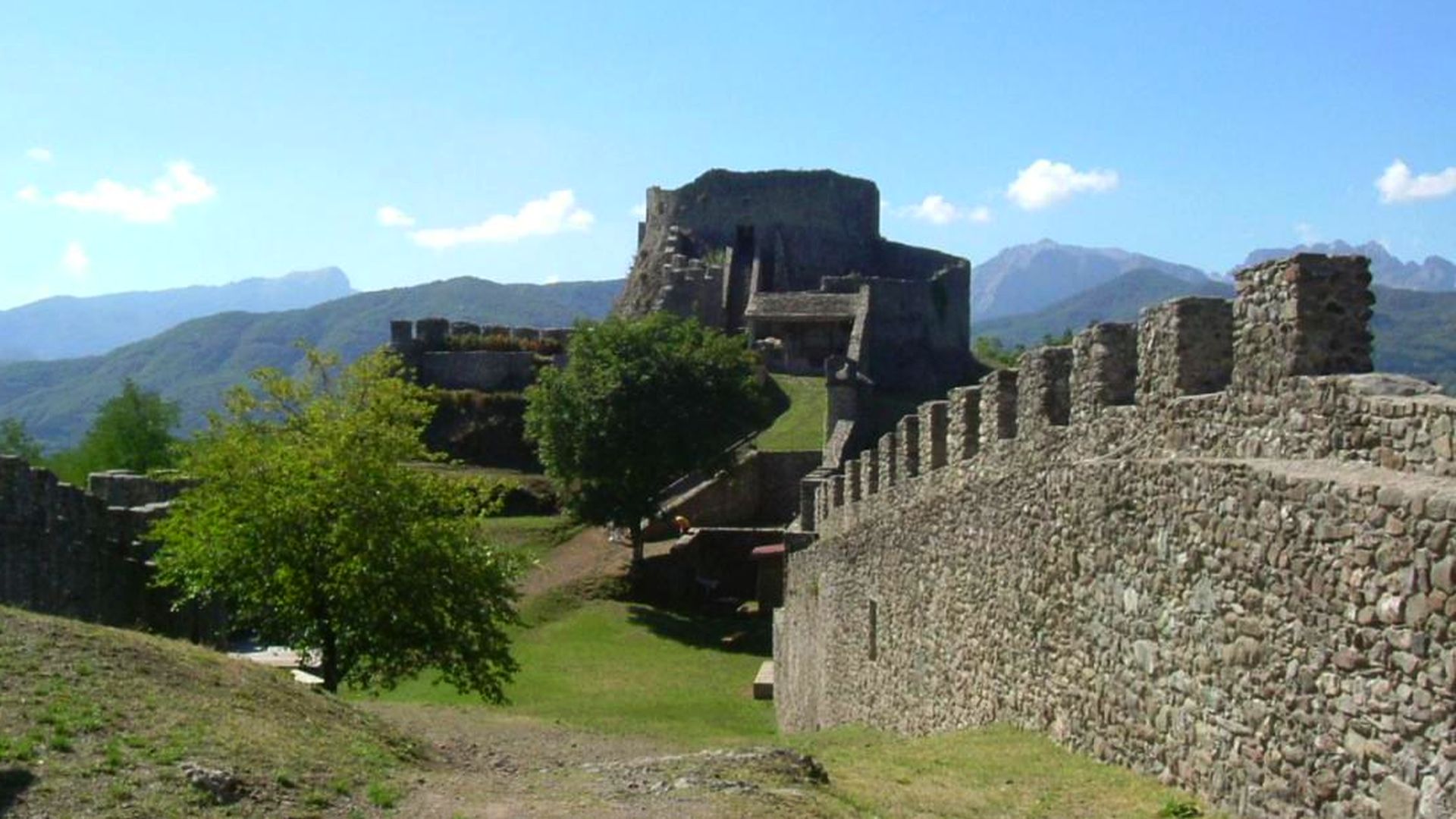 The Serchio valley, located between the soft and shady hills of the Apennines and the rugged and white peaks of the Apuan Alps, also stands out for nature and history.

The Serchio River, which springs from two sources, one in the Apennines, at Buca delle Fate, and the other on the highest peak of the Apuan Alps, Mount Pisanino, gathers its two main branches at Piazza al Serchio, from where the river runs through the valley up to Lucca. Many bridges from different historical periods cross the river at several points. The most famous is the legendary Devil's Bridge in Borgo a Mozzano, the valley's ideal gateway for travellers coming from Lucca who love to take pictures of it. The most elegant is the chain bridge from the nineteenth-century on the Lima river, the most singular is the Villetta bridge, between two volcanic rocks.

Many historical routes allow us to approach the valley as it was once known by travellers who crossed it for reasons of faith or commerce. The medieval Via del Volto Santo proceeds from the Tea pass towards Lucca through thick woods, along a path marked by hundreds of small roadside shrines.
The eighteenth-century Via Vandelli, daringly crossing the Apennines and Apuan Alps, was projected in the 1700s by the Duke of Modena and is a sequence of unique scenarios. The Focolaccia pass, carved into the marble at an altitude of 1650 meters and overlooking the Versilia coastline, is certainly the most spectacular one.

The current railway line, which crosses the valley since 1840, offers a great panoramic view on the mountains and the river in the romantic atmosphere of slow mobility.
The Cipollaio road is the only connection from the internal Garfagnana valley to the coast. It offers a scenery hard to forget, running along the rough and bare slopes of Mount Sumbra and Corchia, the great white spots called "ravaneti" of the marble quarries looking like snow from the coast. The Gothic line, dating back to recent history, is flanked by luxuriant olive trees, symbols of peace. 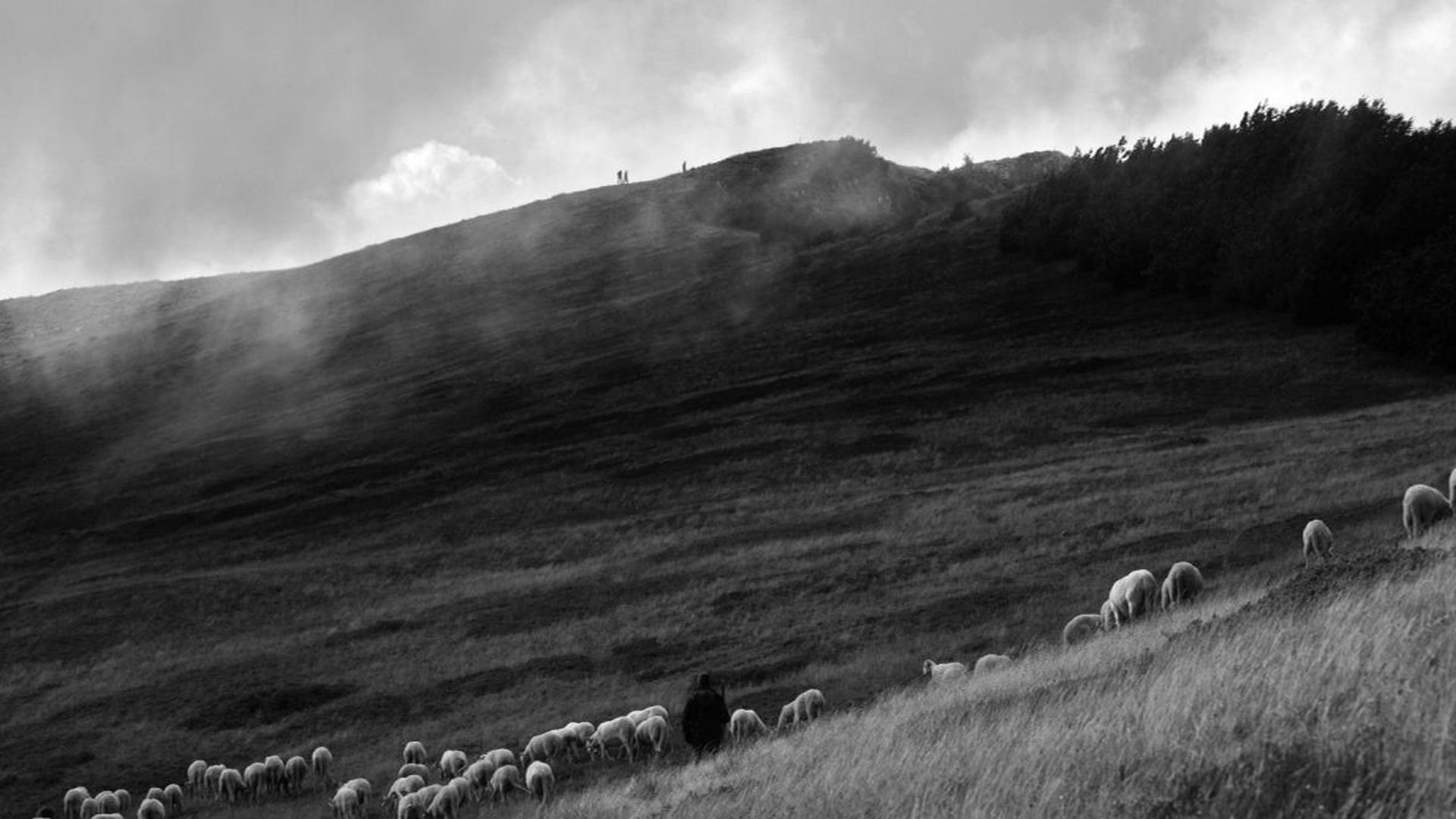 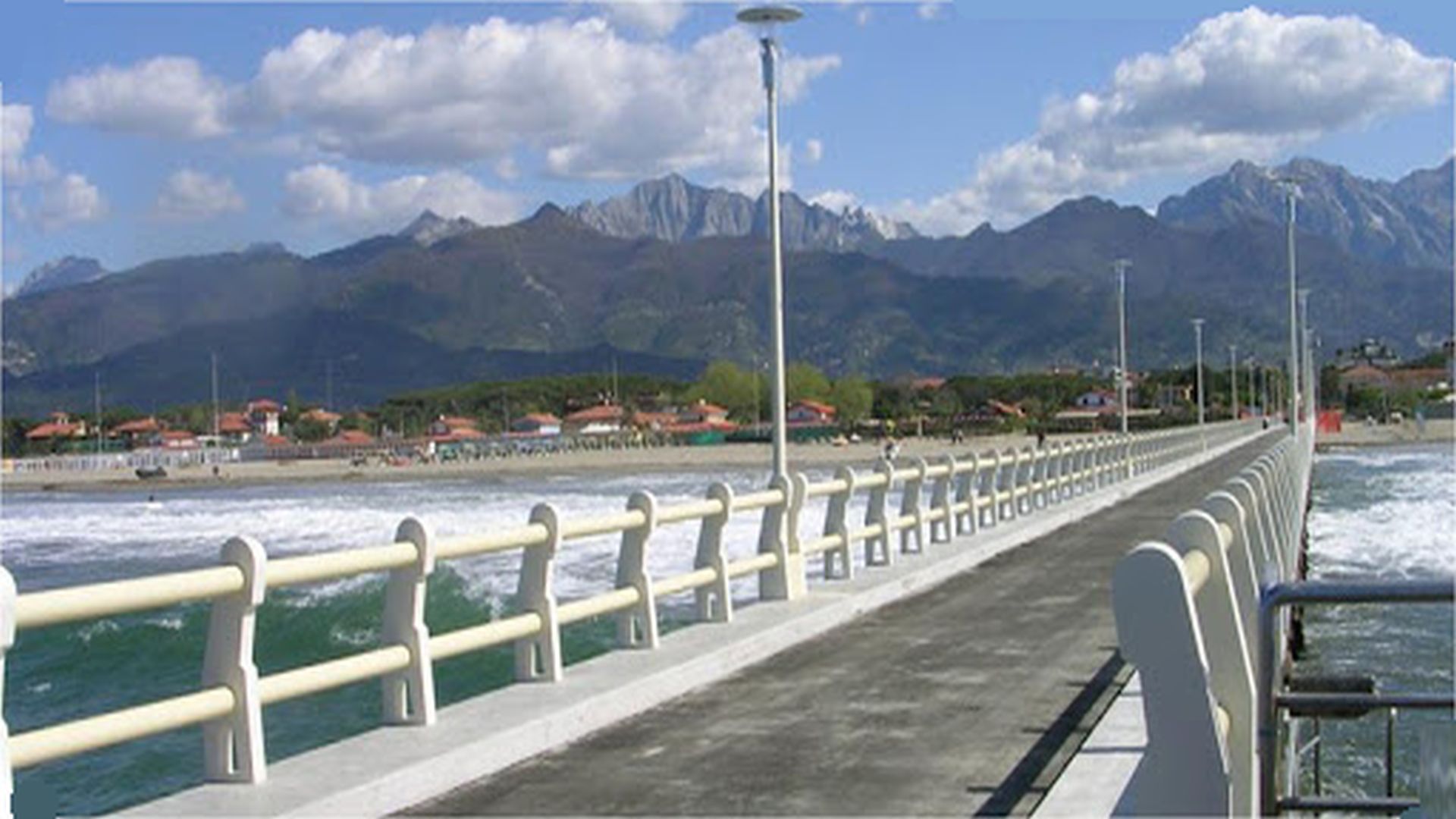