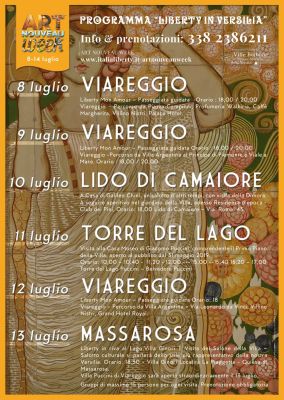 Not only sea in Versilia. Behind the most famous beaches and waves of Italy, there is a Versilia made up of art and culture, already the scene at the beginning of the 20th century of that artistic avant-garde Art Nouveau that, with the bright atmosphere of the coast, attracted Giacomo Puccini, Pinio Nomellini, Luigi dei Servi, Galileo Chini, artists who "invented" the Versilia of "baths", Carnival, piers, the promenade with the fashionable architecture that are still the hallmark of this Mediterranean "promenade".

The same that are celebrated in the Art Nouveau Week from 8 to 14 July in an original and unpublished event spread with many different events all over the world: guided tours, exhibitions, conferences, workshops, performances and shows to allow everyone to live original experiences walking through time immersed in the most beautiful historic houses of this "fashionable" period.

Throughout Italy and abroad there are more than 150 historical residences that can be visited, 120 specific itineraries and then guided tours, exhibitions, conferences, workshops, performances and shows condensed in the Art Nouveau Week, the first edition of an international event created to celebrate the artistic current that between the late nineteenth and early twentieth century overwhelmed the traditional academy.

In Versilia, next week, the most in is the walk through the architecture of a "genius" period of Versilia and Italian culture.
In this international program the association Ville Borbone e Dimore Storiche della Versilia (Bourbon Villas and Historical Houses of Versilia) and the Puccini Foundation propose a visit to exclusive, unexpected and spectacular sites to discover the territory from the point of view of the style that most characterizes it.

On the 8th, 9th and 13th July from 6pm to 8pm, the three Liberty Mon Amour guided walks, a walk along the promenade like you've never seen before.  On July 8th with departure from Piazza dei Campioni with stops at the Walkiria Perfumery, the historic Caffè Margherita, Villino Nistri and the Palace Hotel. On the 9th appointment at Villa Argentina, walk to the Grand Hotel Principe di Piemonte to end with a sunset on the avenues by the sea. On the 12th, again departure from Villa Argentina, walk along Via Leonardo da Vinci to reach Villino Nistri and finally the Grand Hotel Royal.

On July 10th at 6:00 p.m. Appointment at Casa Chini (today residence of the Pini Via Roma Capitale, 265 in Lido di Camaiore) where Claudia Menichini, referent of the Historical Archive of Galileo Chini, welcomes visitors in a living room of yesteryear, accompanies them to visit the Dimora which was the great artist's home and concludes with an aperitif in the garden.

July 11 and 13 could only be dedicated to the greatest among the citizens of Viareggio, Giacomo Puccini. The guided tours anticipate the Festival Puccini which every year, in July and August, welcomes the public in the large open-air theatre on Lake Massaciuccoli.
on 11 July, from 10:00 to 17:00 Guided tours of the Casa Museo di Giacomo Puccini in Torre del Lago, including the First Floor of the Villa recently opened to the public. In the house on the lake he wrote some timeless arias. For his house and his inspiration he sought "a quiet village with luxurious and extraordinary sunsets" which he found here, on the shores of the "caro bozzo" as he affectionately called it. The interiors of the villa reveal his acquaintances and a curious personality, of great refinement and always in search of rare and fashionable objects.

on July 13th at 6:30 p.m. appointment on the other side of the lake, in Piaggetta (Massarosa) in the large hall of Villa Ginori Lisci, for a cultural salon where you will talk about this style, the most representative of Versilia.
On the same day, from 3:00 p.m. to 6:00 p.m. extraordinary opening of Villa Puccini in Viareggio (Viale Michelangelo Buonarroti / Angolo Piazza Puccini - Viareggio) for guided tours by the staff of the G. Foundation. Puccini Foundation staff. (reservation required).