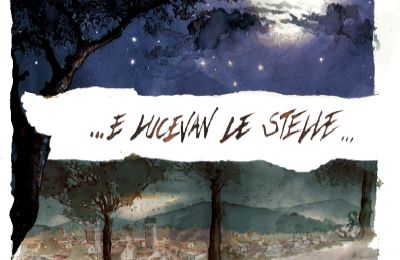 Along the city walls and on the towers of Lucca, a nose-up walk to catch a glimpse of a shooting star in some patch of sky, among the foliage of the trees.
It is the night of San Lorenzo, the night of wishes and Lucca dedicates it to the famous aria from Tosca "The Stars Were Brightly Shining" accompanying you on this night walk with music and stories, in an ideal route from the Civic Towers to the City Walls.

The protagonist will be music,

played in acoustic to preserve the intimacy and magic of this special night that, step by step, will accompany the walk with the notes of Lucca's great composers, in small concerts set in the natural stage of the city's most characteristic places.
On the ramparts, you can enjoy opera and classical music concerts. The barracks will be open and costumed figures will be waiting to tell their story and the history of the city.
Along the curtains, the foliage of the trees and the song of the nocturnal birds that populate this great architecture. Lime trees, Celtis australis, holm oaks, plane trees, silhouettes to be recognised even in the dark, illuminated by moonlight.

starting your walk from the Caffè delle Mura, as architect Nottolini had conceived it

in the 19th century when the City Walls were changed from a military building into an original public park, visitors will find at the baluardo Santa Maria, in front of the Caffè delle Mura, the association Puccini e la sua Lucca with the Puccini Opera Gala: the soloist soprano Fabiola Formiga and tenor Giovanni Cervelli are accompanied on the piano by maestro Diego Fiorini.

At baluardo San Paolino, Massimo Salotti of the Sinfonia music school, composer and pianist of the Catalani Association, will perform at the piano, interpreting true impressions... repertoires by Alfredo Catalani, Giacomo Puccini, Pietro Mascagni and Umberto Giordano.
The casermetta will be open and several exhibitions by the Associazione Contrade di San Paolino can be visited.

At baluardo San Donato, the casermetta that houses the Museo della Fondazione Antica Zecca di Lucca, will be open exceptionally at night, to tell the history of the city through the oldest coins and mints of Europe.

At the little Porta San Donato castle, the Casa della Memoria e della Pace (House of Memory and Peace) home to Liberation Route, an ideal tour through recent history, the places of liberation and the stories that unite the peoples of Europe.

At the barracks of the Baluardo Santa Croce, the honours will be done by the Associazione Laboratorio Brunier, with the concert Suggestioni sonore dalle stelle, which brings together the great classics and contemporary authors in a selection of pieces by Catalani, Puccini, Luporini, Pacini and contemporary composers from Lucca. Lucia Bianucci, Mauro Fabbri and Stefano Teani will perform with Ensemble Brunier Lucca, a string quartet composed of Agnese Manfredini, Valeria Barsanti, Pierpaolo Riccomini, Caterina Mancini and Mauro Fabbri and Stefano Teani on piano.
On the programme, also a poetry readings by Loredana Bruno with musical improvisations by Maria Bruno and flutist Agnese Manfredini, and a tribute to Maestro Puccini and poet Giovanni Pascoli, author of the poem X August.
In the barracks, the theatrical costumes of Puccini's female heroines made by costume designer Franco Nieri will be on display.

At the San Frediano platform, the Animando and Virtuoso&Belcanto associations present How I met Puccini... waiting for 2024, with soprano Ilaria Casai, flutist Agnese Manfredini, and cellist Francesca Gaddi who will perform Puccini arias arranged for the occasion and premiered by composer Valentina Ciardelli, preceded by a reading of verses by Giovanni Pascoli.
The Associazions Sbandieratori e Musici Città di Lucca and the Associazione Historica Lucense will animate the casermetta San Frediano with displays and historical re-enactments.

At baluardo San Martino, the music association La Boheme, with soprano Silvana Froli, Sara Tomei on transverse flute and other musicians, will perform South American music and Le donne di Puccini a collection of the most famous arias by the great opera composer from Lucca.

At baluardo San Pietro, the Association Balestrieri di Lucca (Crossbowmen of Lucca) will take you back in time to the Middle Ages, on a visit to the basement of the bastion and the shooting stations set up in the vaults amidst fluttering flags and tales of glories and victories.

At baluardo San Salvatore, soprano Greta Buonamici, a student of the L. Boccherini Musical Institute of Lucca, is the voice that will interpret pieces by Debussy and Puccini accompanied by pianist Simone Rugani of the Associazione Musicale Lucchese.

At baluardo San Regolo the FLAM association presents Cantare in Musica, a concert between classical music and opera, on pages by Puccini, Catalani, Mozart, Haendel, Ravel and others, interpreted by soprano Chiara Ramello and mezzo-soprano Tania Notte accompanied by pianist Isabella Gori.
The Sagra Musicale Lucchese, on the other hand, offers a musical journey from Mozart to Catalani, from Puccini to Dvořák and Piazzolla.with Niccolò Bartolini on the piano and Valeria Del Soldato on the violin.

At baluardo San Colombano, in front of the barrack, the Filharmonie orchestra will play with Martselina Davitaya, violin; Elisa Barsella, viola; Andrea Sernesi, cello in collaboration with the Centro Studi Boccherini, with a repertoire dedicated to the great composer of the most famous Minuets, Haydn and others.
Inside the barrack, which houses the Puccini Study Centre, the Puccini Foundation invites you to visit Vissi d'Arte: the painter Tito Mucci's homage to Puccini's twelve operas.

And finally, after the spectacular stretch of wall flanked by monumental liriodendrons, this hypothetical circle closes with the Castello di Porta San Pietro, where the Associazione Lucchesi nel Mondo will be waiting for you, with stories of other worlds and other journeys and the possibility of visiting the technical rooms of Porta San Pietro.

And, as the icing on the cake, or we should better say a shooting star in the night of wishes,

the Civic Towers, Torre Guinigi and Torre delle Ore, will also be open from 9:00 p.m. to 11:30 p.m. (last round of visits) with a single ticket of € 3.00, to admire the starry sky and the beauty of the city from a privileged viewpoint. Climb the more than 200 steps of the Guinigi Tower to reach the hanging garden suspended in the sky, one of the symbols of Lucca in the world, and the ancient Clocktower with its unmistakable profile that still marks the time in Lucca thanks to an ingenious 18th-century mechanism, one of the best known in Europe.

Tickets can be purchased online or booked on the Summae platform or through the ticket office (+39 0583 48090).

Updates and other information on the programme on the social channels Facebook (LuccaTurismo) and Instagram (Turismo Lucca).