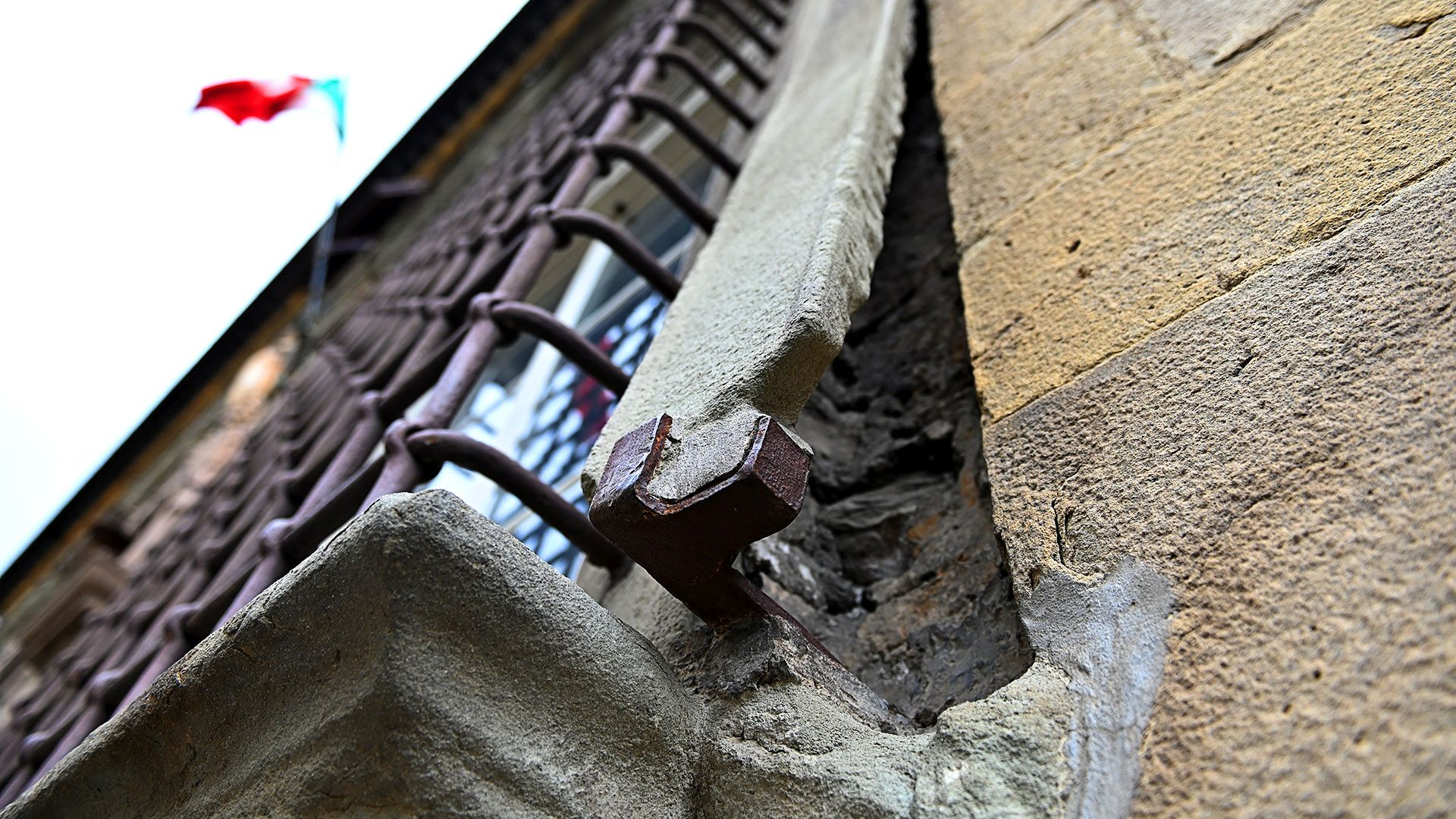 All cities hide mysteries and Lucca is certainly no exception!
While waiting for the urban trekking event at the end of the month, let's discover together some thrilling places with Antonella Marcucci, a tourist guide of Lucca.

on the facades of many churches there are some strange, more or less deep signs ... they say that it was the Devil to make them! Angry for not being able to corrupt some good soul or because he was not allowed to enter sacred places, he attacked the facades, scratching the marble stone with his filthy nails. If you have a look at the facades of the San Frediano and San Pietro Somaldi church, you will see many scratches! Who knows if they were really made by the Devil ...

a fresco created in the mid-1600s by Giacinto Gemignani, a painter from Pistoia, illustrates a man who lost everything he owned playing cards, praying to the Madonna as a lucky charm. Blinded by anger for having lost everything, he violently threw a stone at a fresco representing the Madonna and child. The Virgin on the image moved the child from one arm to the other to protect him from the stone, before being seriously injured on the shoulder, according to the witnesses. As a punishment, Our Lady raised the unfortunate player in mid-air giving him time to repent, but since repentance did not come, she slipped the stubborn sinner into an abyss that opened right at his feet and sent him directly to hell! The hatch was then sealed to prevent accidental falls...

this is the name of the jamb of one of the windows on the ground floor of Palazzo Bernardini. Apparently the Bernardini family, at the beginning of 1500, entrusted the works of the building that represented their wealth and power to an architect inspired by the Devil, or perhaps the Devil himself, who advised them to tear down the cumbersome in front of the Santa Maria church (some remains came to light during the excavations carried out in 2018) or a sacred image present there .. but that jamb seemed not to appreciate being a part of the diabolical project and bent as a sign of resistance! Even today it is clearly visible on the side of the main door of the Palace.

in Lucca death penalty had not been often inflicted over the centuries, so that in case of need, the executioner of Pisa was paid to carry out the task. From 1800 onwards, however, Napoleon's laws had exacerbated the penalties and the number of executions increased so much that the city bought a guillotine in order to nominate some locals as executioners to avoid paying the Pisans who, in this particular moment, had increased the rate. However, nobody in Lucca wanted to hold this task and Tommaso Jona, former executioner assistant in Rome, who was 52 years old when he accepted the job in 1825, was permanently hired.

Obviously the executioner had to live somewhere in Lucca, but no one was enthusiastic about having a neighbor with such a particular job and therefore he was assigned a house that was actually an integral part of the city walls (a tower), at a certain distance from the citizens' homes. Lucca never amortized the cost of the guillotine since it was used just few times and Jona himself aged peacefully until the last death sentence in 1845 for 5 criminals he could not execute, as he was now seventy and full of aches and pains: he was replaced by an executioner called from Parma who got help from his three children.
Two years later, the death penalty was abolished in Tuscany, the first state in Europe to do so, thanks to the Grand Duke Leopoldo and Lucca, now under the dominion of Florence, got rid of the guillotine, throwing it into the sea in ​​Viareggio.

over the centuries churches often become places where the history of a city is preserved through monuments, altars, statues, tombstones, paintings, tombs, relics ... The San Francesco church can rightly be considered the Pantheon of Lucca thanks to the presence of memories linked to Castruccio Castracani, Luigi Boccherini, and others.
While exploring the church, we also find the remains of a sepulchral monument dedicated to Nino or Ugolino Visconti.

Son of Giovanni Visconti, Judge of Gallura and Giovanna, daughter of Count Ugolino della Gherardesca, he was a prominent figure of the Guelphs in the political situation of the time, succeeding at the same time his father as Judge of Gallura. He died young, at 31, and arranged, as a sign of tenacious fidelity to his political faith, his heart to be taken to Guelph Lucca and buried in the church of the Franciscans, as a plaque recalls. But in 1746, in the reconstruction of the chapel, the tomb was sabotaged and the box containing the heart of the Judge was stolen ... now only remain the verses of his friend Dante talking about him in canto VIII of Purgatory (verses 46-60 ).