A pwalk on the city walls

A walk through history and nature

The Wall of Lucca is a true urban park: the link with history and culture is very strong. A reason to take some time to visit the small museums housed in the barracks where you will discover interesting curiosities about the history of the city: the oldest mint in Europe, the crossbowmen who compete in the Palio every year in honor of the patron saint and the holy cross, the small but interesting Botanical Garden, the nineteenth-century café that represent the final destination of the wall as a public park. 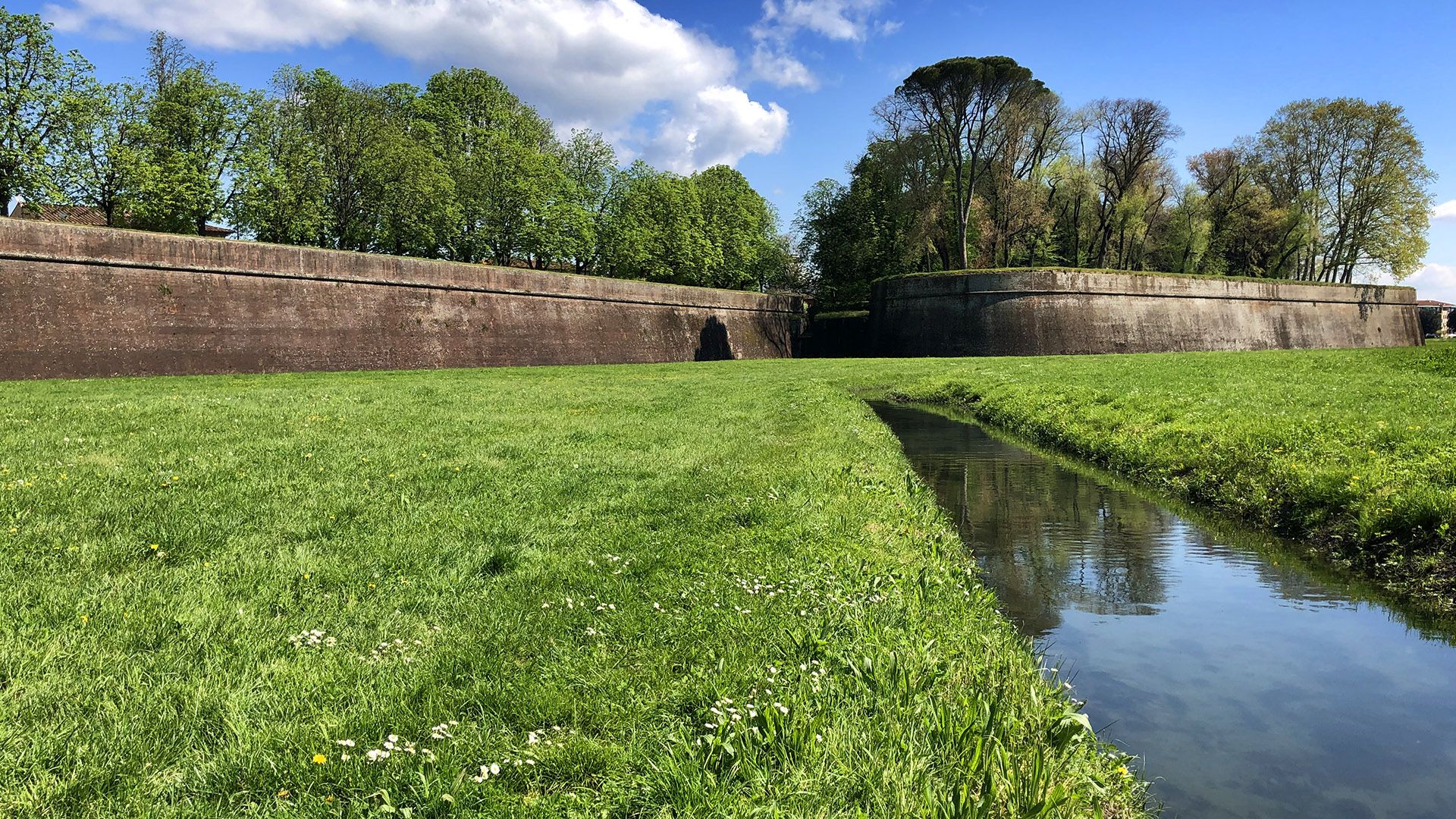 The wall is also a privileged point of view for a visit of the city. From the 12 meters high walk, you have an unexpected panorama on the main monuments, the apse of the cathedral with the imposing bell tower and that of San Frediano with a single view that also includes the eighteenth-century Palazzo Pfanner with its garden. The unmistakable shape of the Guinigi tower with the plume of holm oaks on the top and the clocktower with the wind vane. The botanical garden with the pond where the story of Lucida Mansi's beauty ends, the sober towers of the medieval wall and the chimney of the Tobacco Factory.

A walk on the city walls in autumn 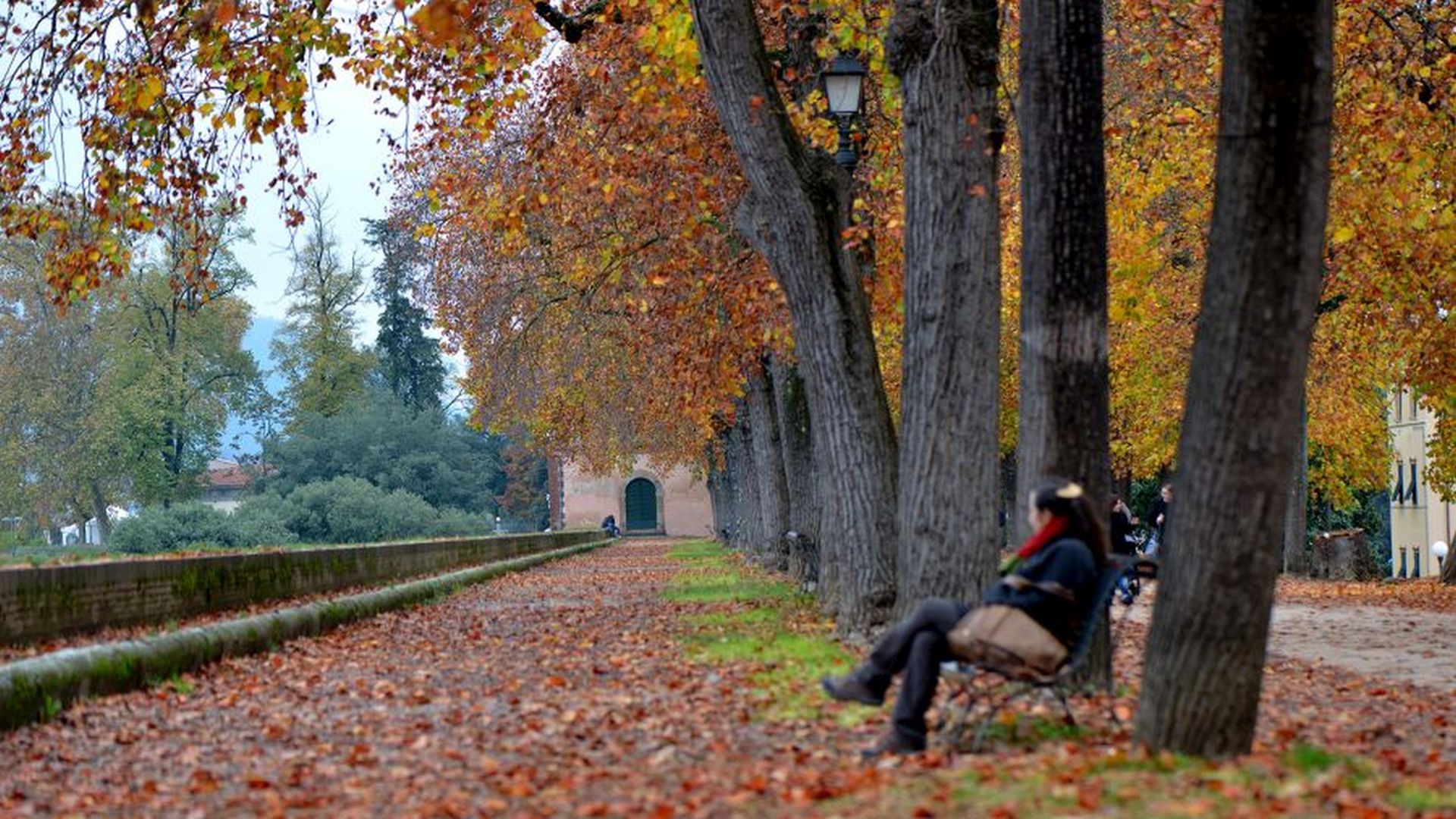 Garden of Palazzo Pfanner from the city walls of Lucca 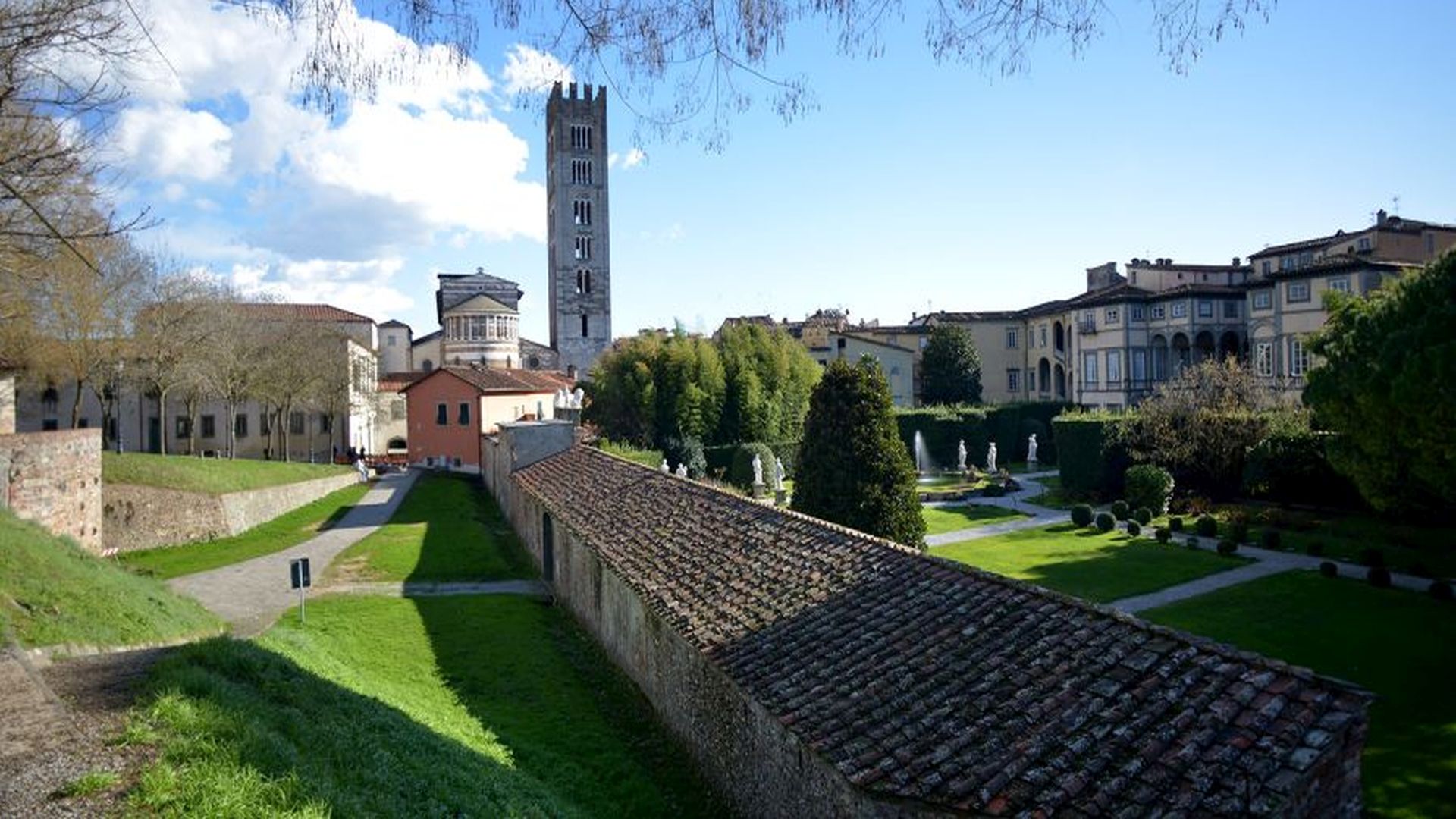 Daisy flowering on the city walls in spring 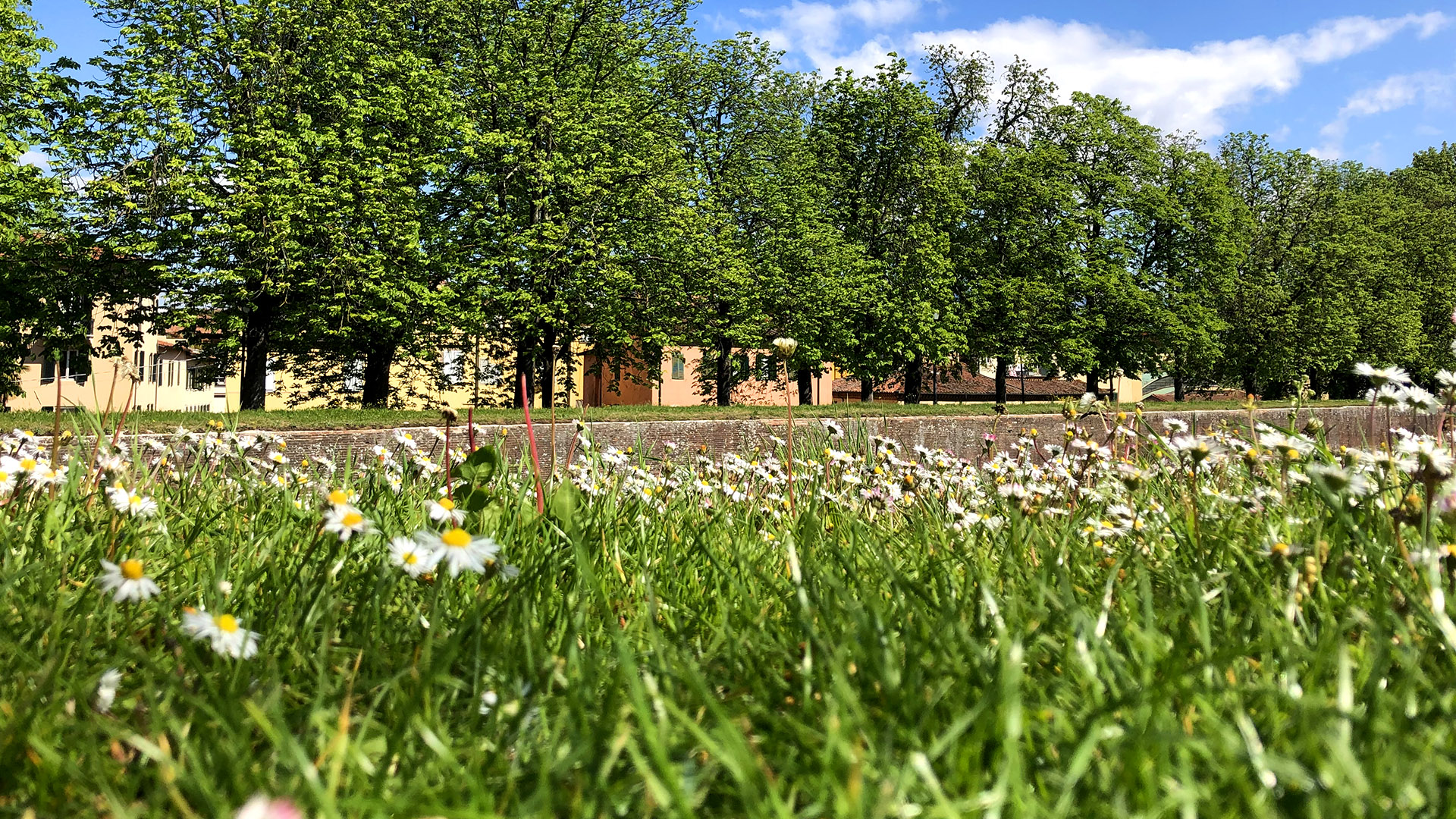 Underground of the city walls 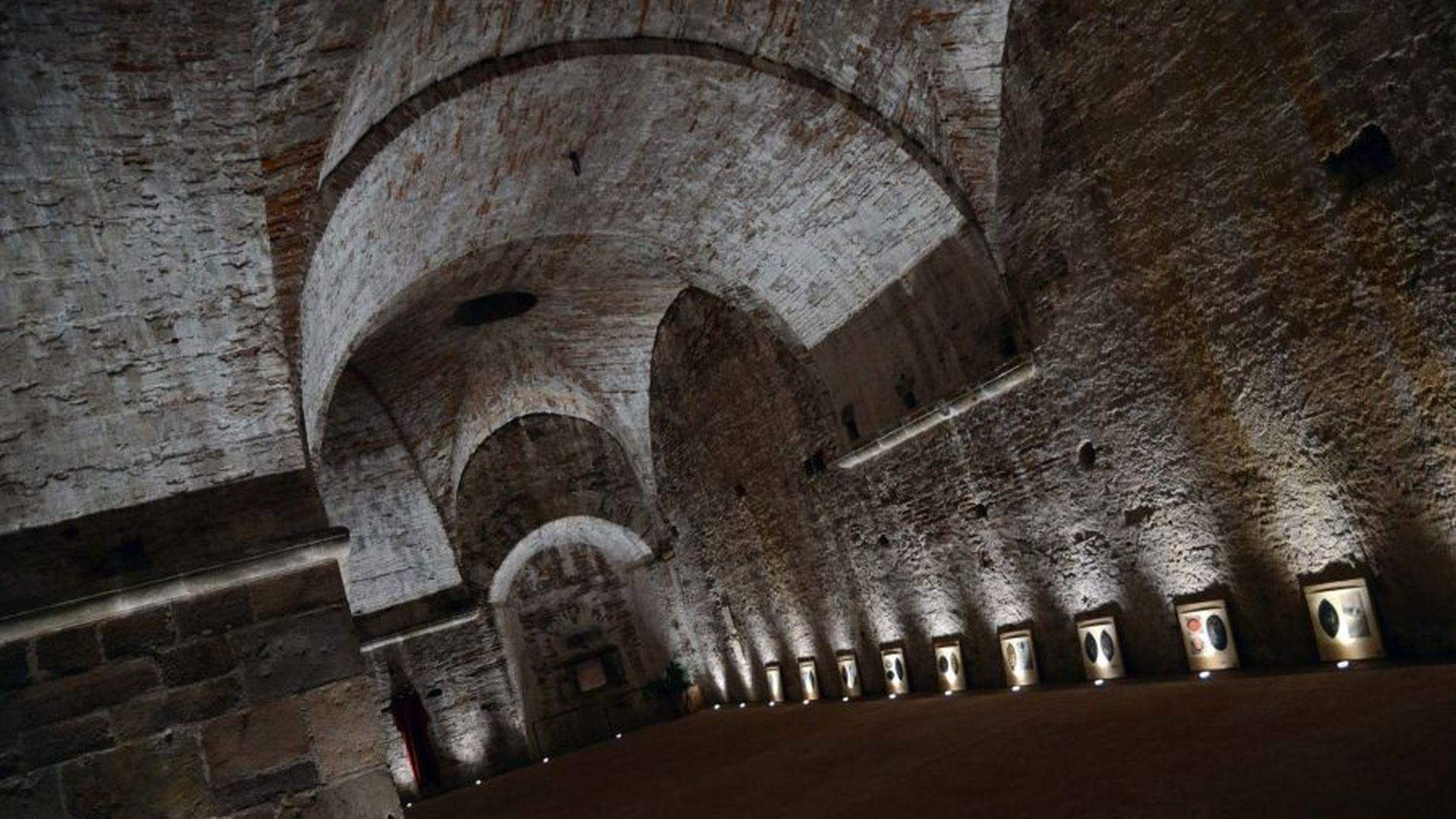 Game of flags at the "casa del Boia" 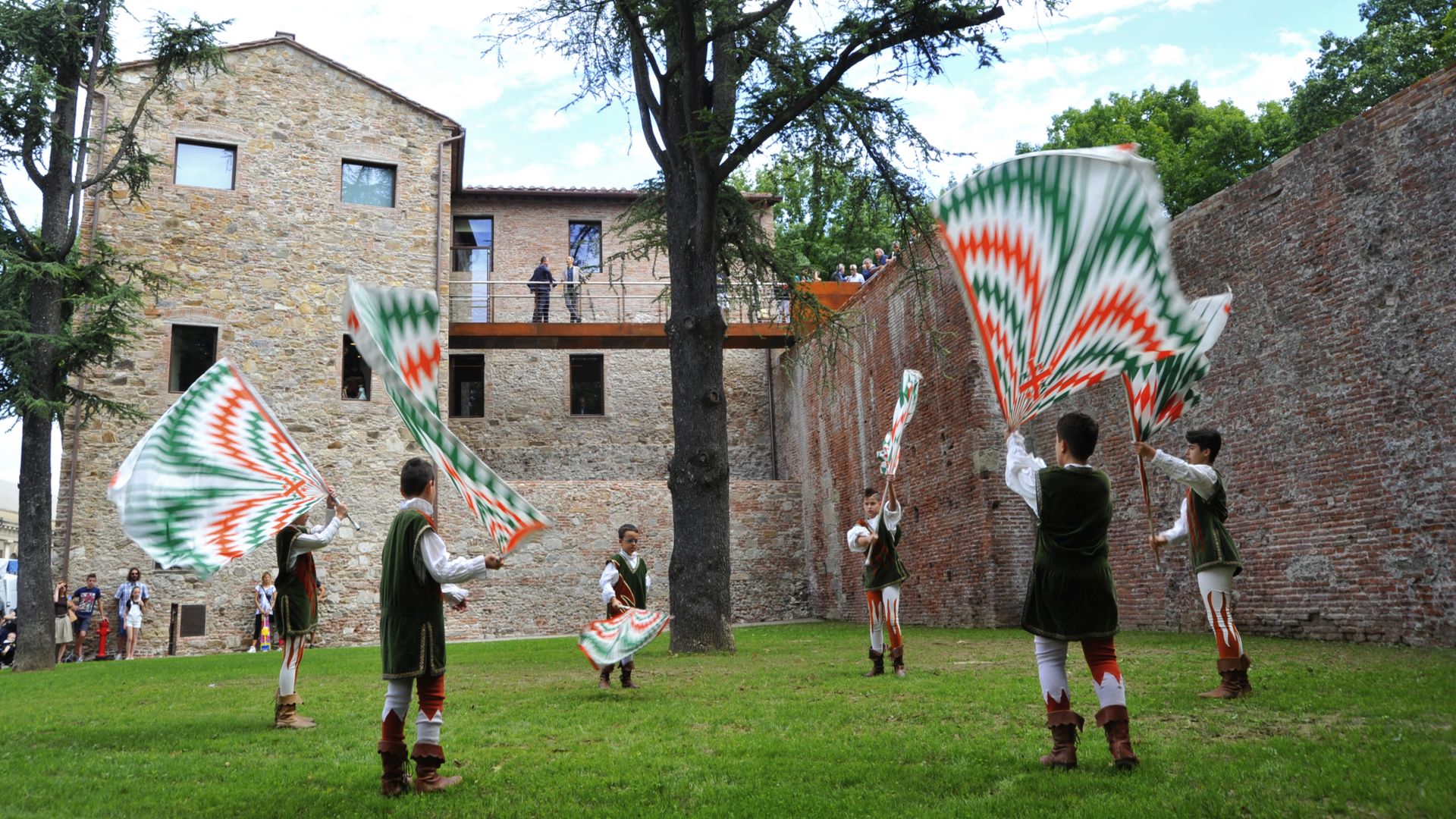 View from the walls of Lucca 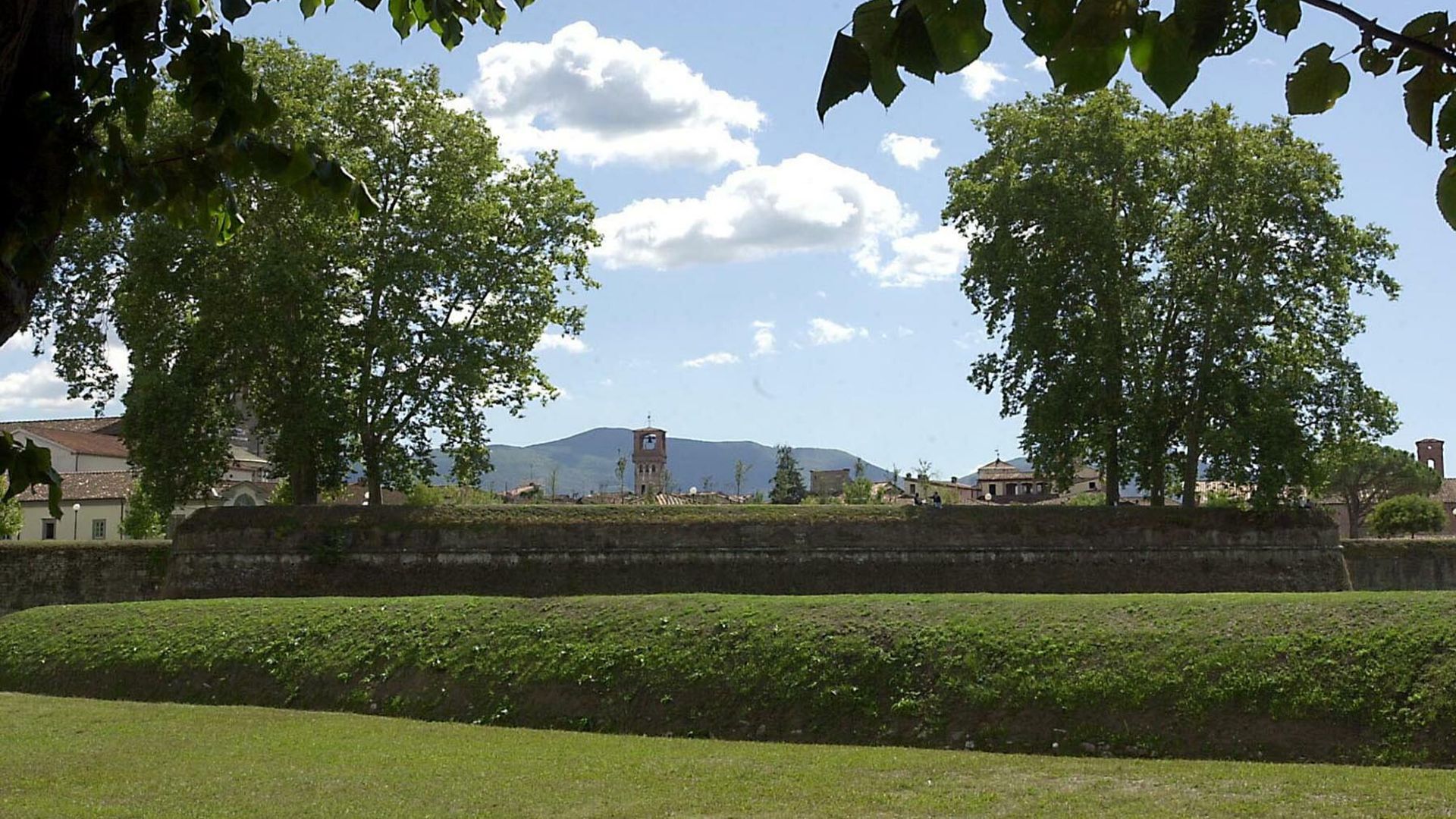 The Wall of Lucca is a unique promenade in the world, with an uninterrupted and constantly new view on the monuments, churches, palaces of the city.

From Baluardo Santa Maria, where the Caffè delle Mura has been located since 1840, proceeding to the left, you pass the fortress above Porta San Pietro, seat of the House of Memory and Peace.

Outside the city, the panorama extends over Mount Pisano. From Baluardo San Colombano, towards the city centre you can see the bell tower and the beautiful apse of the Cathedral of San Martino and a little further on you can catch sight of the remains of the Roman walls near the church of Roses.
Once you reach Baluardo San Regolo, you can stop at the Botanical Garden and take a look at the romantic via dei fossi.

After baluardo della Libertà you reach Porta Elisa, a gate opened in the nineteenth century by Princess Elisa. From this beautiful neoclassical gate in white marble you will also see the mighty towered gate of the medieval walls, dedicated to the saints Gervasio and Protasio. Further on there is Piazza Santa Maria Foris Portam (“outside the Roman gate”) and you are ideally on the path of the ancient decumanus maximus.

Continuing the walk on the wall, you will cross the curtains and ramparts of Baluardo San Salvatore where for locals "the executioner's house" is located, now seat of the Francigena Entry Point, a virtual route on the Via Francigena. Continuing between red oaks arriving outside the wall, it is possible to reach the foot of the Pizzorne plateau where the path of the monumental villas of the surroundings of Lucca begins.

A look at the roofs and the hills.

Proceeding on the wall, in casermetta San Pietro the company of the Crossbowmen of Lucca is located.  After passing baluardo San Martino and the fort of Porta Santa Maria, you reach the San Frediano Platform. Inside the wall circle, a beautiful framing is offered by the apse of the San Frediano church and the splendid eighteenth-century garden of Palazzo Pfanner. Outside, the view opens on the imposing green surface of the wall's ramparts where the rare structure of "lunettes" with moats is still preserved, and beyond the surrounding hills of Lucca and the unmistakable profile of the Apuan Alps.


The path of the hanging walk continues towards the Baluardi Santa Croce and San Donato where the ancient Mint of Lucca is located. A visit to the collections of ancient coins is worth a stop, testifying to the long history of the city. The next curtain is shaded by Italic poplars, symbolic trees of the plain of Lucca. Outside the gaze reaches the hills of the Morianese area, where further beyond the Versilia coast extends, while inside the wall the sight and the sense of smell are attracted by the large building of the Manifattura dei Tabacchi of Lucca, a factory inside the city, representing an important element for the city life of Lucca, since it is the place where the legendary "Toscano" cigars were made by hand for years.

Back again at the Caffè delle Mura where the walk started, you can step into the footsteps of the Duchess Maria Luisa, descending from the wall and head towards the heart of the city: passing Piazza Napoleone to Piazza San Michele.