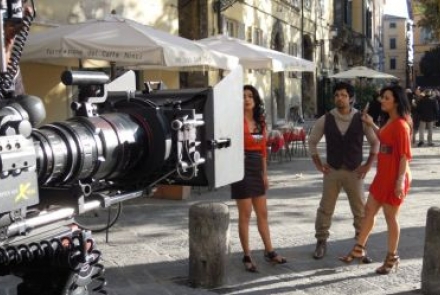 From art films to romantic comedies, from historical films to entertainment movies, Lucca and its surroundings have appeared many times on the big screen, as a protagonist or simply in the background.

The historic center of Lucca and its narrow alleys, the Renaissance palaces and the mighty walls, the magnificent historic villas, the gardens and the hills, the landscape, its atmosphere of a small capital, full of charm and romantic suggestions, have made of the city and the hills an ideal set for many films.

Walking through the places where great films have been shot is a much appreciated tour by movie fans and curious visitors to be done in every season. An experience that cannot be missed for all those who love cinema.

A take to the heart!

Let's start from the cathedral of San Martino and its precious Volto Santo, a venerated wooden statue, in 1948 the subject of the first production entirely realized in the city of the Walls, the docu-film by Andrea Forzano with a very young Sofia Loren.
The Teatro del Giglio and the nineteenth-century railway station are not far and that's where Renato Castellani's Zazà is set, in 1944, with background music by Maestro Nino Rota.

With Frenesia dell’Estate in 1964 (in the cast the popular Vittorio Gassman) and La Provinciale with Gina Lollobrigida, sex symbol of the time, among the protagonists, and the great actors of Italian cinema are the testimonials to the beauties of the city. The province of Lucca is the scenery of the film and you can recognize via Fillungo, Piazza dell’Anfiteatro, the City Walls, Porta San Pietro and the historic Carli goldsmith's shop in some takes.

A walk through Lucca, between winding streets and beautiful fountains, is also part of the romantic American comedy Spin me round, directed in 2021 by Jeff Baena.

Maybe you don't know that Lucca has been chosen also for other important films. A splendid Piazza Anfiteatro in the moonlight is the backdrop to one of the most exciting scenes of Giovani Mariti, a film directed by Mauro Bolognini in 1958, awarded at the Cannes Film Festival. The plot unfolds in a provincial town that is not mentioned, but Lucca is clearly recognizable with the City Walls, via dei Fossi, the cathedral of San Martino and Piazza Napoleone.

In Finalmente la felicità, by the Tuscan director Leonardo Pieraccioni (2011), the city is the protagonist with its walls that embrace the city, the ancient traditional theater and the prestigious Luigi Boccherini music institute and the images of the singular and fascinating Devil's Bridge of the nearby town of Borgo a Mozzano. The choice of Lucca couldn't be more appropriate since the "professor" played by Leonardo Pieraccioni teaches music in the city of Giacomo Puccini and Luigi Boccherini, composers known all over the world.

The Palace ... of cinema

Its poignant and romantic atmospheres, the monumental staircase and its splendid baroque style garden have made Palazzo Pfanner one of the most scenic and cinematic places in Lucca. Lying at the foot of the walls, it is among the Topviews of the city while walking along the tree-lined avenues of the Walls.

Many films have been shot in this building. In one of the most famous scenes of Portrait of a Lady, the 1996 blockbuster by director Jane Campion, Nicole Kidman wanders through the desolate halls of the residence which in the film (the other stars are John Malkovich and Barbara Hershey) turns into the Florentine villa of the Machiavellian character of Osmod.

The palace has also been chosen by Mario Monicelli in 1981 for Il Marchese del Grillo as the home (actually Roman) of the Marquis Onofrio, played by Alberto Sordi. The large four-poster bed is an authentic eighteenth-century bed kept in the museum of Palazzo Mansi in Lucca.

The palace owned by Onofrio del Grillo in fiction is located in Rome but in reality it is Palazzo Pfanner, a magnificent seventeenth-century palace set between the center of Lucca and the Renaissance walls, which for the director Monicelli reflected the imagination of the papal nobility.

Luigi Magni's Arrivano i Bersaglieri (1980) with Ugo Tognazzi and Vittorio Mezzogiorno is also set here, and Giuseppe Bertolucci's L’amore probabilmente (2001), as well as scenes in Piazza Anfiteatro and Villa Rossi, a sumptuous residence in the Lucca countryside.

In March and December we celebrate this cult film of Italian comedy starring Alberto Sordi, released in the 1981-82 film season with a day in the footsteps of the Marquis to relive the scenes of the film and visit the residence, the imposing staircase, the salons frescoes and the fantastic garden designed by Filippo Juvarra.

For Info and reservations (required): cinema@supercazzola.it

Cinema in Lucca has a long tradition. The city celebrates cinema with its own festival. The Lucca Film Festival, created in 2005, pays homage to film culture with national preview screenings, feature film competitions and shorts from the independent circuit, exhibitions, conferences, performances with a plurality of views, styles, perspectives.

The festival takes place between late September and early October and hosts international directors and stars awarded by a technical and popular jury. The thematic exhibitions are dedicated to famous Italian and International movie stars and collaborations with international festivals dedicated to experimental cinema and video art.