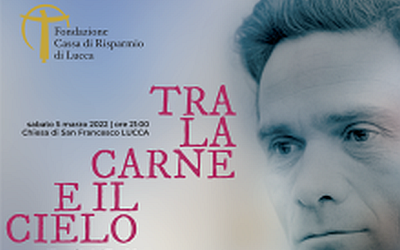 On the centenary of the birth of Pier Paolo Pasolini, a show of readings and music conceived by Valentino Corvino with the narrator of Moni Ovadia, entertainer, creator, director and actor of a absolutely peculiar musical theater, will be staged in the church of San Francesco with the title Tra la carne e il cielo,

On March 5 at 9.00 pm at the San Francesco Auditorium, memories, letters, poems and interviews by Pier Paolo Pasolini ranging from the "Red Notebooks" to the interview granted to Furio Colombo a few hours before his death. Extraordinary pages accompanied by the music of J.S. Bach, loved and used by Pasolini as the soundtrack of his films for a specific reason: the sometimes peaceful and sometimes painful coexistence between earthly impulses and a very high spirituality.

The musical accompaniment is entrusted to the violinist Valentino Corvino, the contralto Benedetta Mazzucato and the Sonora Corda ensemble, consisting of a vocal quartet, violins, violas, cellos, oboes, flute and double bass. The show is enriched by the projection of rare and precious photos taken from the sets of the films “Teorema”, “Uccellacci e uccellini” and “Vangelo Secondo Matteo”.

Reservation is required on Eventbrite